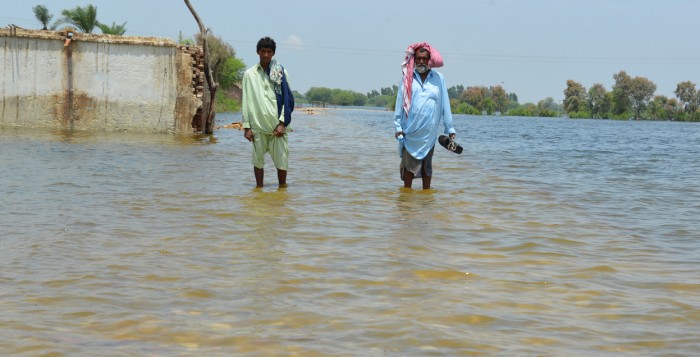 The monsoon rains that struck Pakistan in the third week of July are still continuing across the country. As a result of the heavy monsoon rains and melting of glaciers in the north of country, there has been widespread flooding in different regions of the country. The table below shows the level of damages reported till today:

The floods have also severely damaged the infrastructure and local livelihoods of many parts of rural and semi-urban Pakistan; agricultural fields and crops have been damaged. A number of local markets, link roads, connecting bridges and micro-hydro power stations have been reported damaged as well.

As per the latest reports of the Pakistan Meteorological & Hydrological Department, the River Indus at Guddu Barrage is likely to attain a High to very High flood level ranging between 650,000 cusecs to 750,000 cusecs during 1400 PST of August 1st to 2400 PST of August 3rd 2015. It was further added that the flood levels will continue to remain high for the following seven days.

River Indus at Sukkur is also reported to maintain a High to very High flood level ranging between 650,000 cusecs to 750,000 cusecs during 1200 PST of August 2nd to 2400PST of August 4th2015. Flood levels will remain high for the next seven days in this region as well.

Unceasing heavy monsoon showers are expected in the coming days across Pakistan and a further increase in the water levels in Kabul, Indus, Jhelum and Chenab Rivers may intensify the flooding in Sindh. The Director General of the Meteorological Department still maintains as per his earlier message that India is also likely to release excess water from its dams in the following days which can upsurge flooding in the low-lying areas of Pakistan also. The authorities have warned of massive destruction in interior Sindh in the subsequent weeks as flood water from all of over the country will pass through catchment districts of Indus River in the Southern province.

The impact of the latest flash floods on different provinces of Pakistan are indicated briefly below: