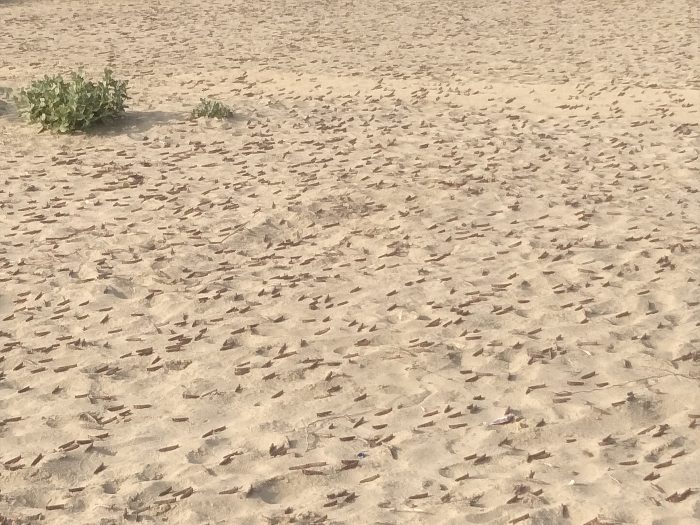 Pakistan has recently experienced a fierce desert locust attack. On February 1st, the Government of Pakistan declared the attack as a national emergency due to the presence of the prolonged locust swarms and the damages that they have caused to the agricultural crops and local rural communities in parts of Sindh and Balochistan. The locusts enter Pakistan from two sides; on the western front, the locust swarms enter Pakistan through Balochistan from Iran, while from the east, they attack through Indian Rajhastan in Cholistan and Tharparkar deserts.

Last year in March, the locust swarms entered Balochistan and further spread into the Sindh and Punjab provinces by June 2019. After summer breeding in Thar, Nara and Cholistan deserts of Sindh and Punjab, the locusts migrated to Indian Rajhastan deserts in July and re-entered Tarparkar in Sindh in October 2019.

The Food and Agriculture Organization (UN-FAO) anticipated that the locust infestation in Pakistan will persist throughout October and then will move into south eastern Iran and Sudan by mid November. However, the outbreak has continued due to moisture in the atmosphere, sandy soil and vegetation and favourable weather conditions ( caused by climate change) for the locusts to breed. This is not the first time for such an attack. Locust swarms have caused huge damages to Pakistan’s agriculture back in the 1950s, 1960s and 1990s as well. According to FAO’s senior locust forecasting officer, “locusts increase 20-fold every generation, which equates to roughly 8,000 times the number of locusts compared to the beginning. In search of food, locusts travel in swarms (of between 30 to 50 million) and can cover a distance of 150 kilometers to devour 200 tonnes of food in a day.”

After three years of arid conditions, the region saw pouring rains this season, recharging the wells and pushing up tall grass. The villagers sowed their crops and were looking forward to a bountiful harvest when the locusts struck.

The General Secretary of Sindh Chamber of Agriculture has announced that the locust attack this year has destroyed 40% of crops which include wheat, cotton, maize and tomato. The local communities feel that the locust attack has destroyed their standing crops. The area had received some rains in monsoon season, and though the rains were inadequate for the revival of all agricultural activities, it had still produced some pasture/grazing areas for livestock. These pastures have also been entirely damaged by the locust and has resulted in extreme food insecurity among local communities and their livestock.

The Government has taken action against this insect infestation over 0.3 million acres (121,400 hectares)  and aerial spraying over 20,000 hectares of land has already been done. “District administrations, voluntary organizations, aviation division and armed forces are all positioned into operation to combat the attack and save the crops,” shared by the Minister for National Food Security. In order to mitigate the effects of the locust attacks in future, Integrated crops and pest management (ICM/IPM) trainings are proposed to make the communities aware on pest management and on which crops to be cultivated and are less prone to such attacks.