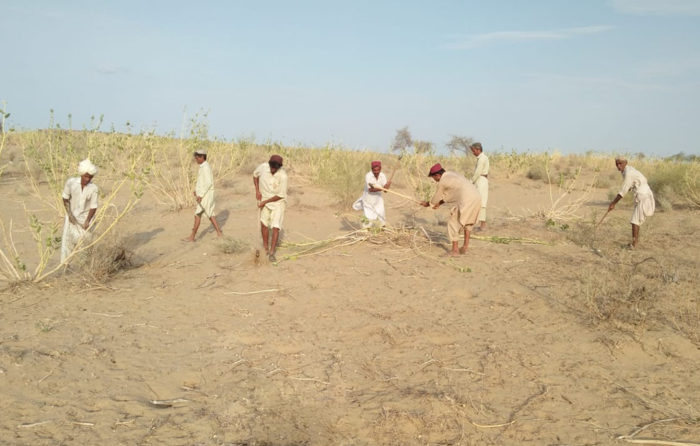 Community World Service Asia (CWSA) is working in partnership with the National Disaster Management Authority (NDMA) to combat locust infestations in various parts of Pakistan. Through financial support from the Japanese Embassy in Islamabad, Japan Platform and CWS Japan, 58,502 liters of Lambda Cyhalothrine EC2.5% pesticides are provided to Provincial Disaster Management Authorities (PDMAs) of the respective provinces. The intervention will ensure a safe and secure application of the pesticides as per the plant protection guidelines. CWSA is also supporting 1,600 farmer families with conditional cash grants for tilling/ploughing of lands to eradicate the locust eggs before hatching. With this support, around 16,187 hectares of land will be made free of locust eggs and will be prepared for the next cultivation. As an additional preparedness measure, around 2,000 farmers will be trained on Integrated Crop Management and Integrated Pest Management approaches to be able to efficiently manage similar threats in the future.

Many Pakistani farmers, particularly in Pakistan’s Sindh province, are currently struggling to combat a series of natural hazards that have left agrarian communities crumbling. The country’s agricultural sector has been struggling for years in the face of drought and dwindling water supplies and since last year has been hit by the worst locust plague to hit the country in nearly three decades. Showing no remorse, the COVID-19 landed in Pakistan with full intensity in March and has since endangered lives and livelihoods of millions of Pakistani people.

On Sunday July 5th the country was hit by its first monsoon rains that wreaked havoc in Karachi and other areas of Sindh further damaging crops and threatening lives. The rains are expected to continue pouring with the same intensity through the season. This will further drive Sindh’s most vulnerable rural communities into extreme poverty and famine.

Pakistan declared tackling the locust infestation as a national emergency in February 2020 as it destroyed huge areas of crop lands in the country’s most fertile province of Punjab. The Locusts have decimated entire harvests in the country’s agricultural heartlands and have sent food prices spiraling. The agriculture sector that provides food security and livelihoods to a large majority of Pakistan’s population has been damaged and severely threatened.

Since June 2019, thirty-eight percent of Pakistan’s land (60% in Baluchistan, 25% in Sindh and 15% in Punjab) has become a breeding ground for the desert locust. If the breeding regions do not contain the hazardous pests, the entire country could well be threatened by a locust invasion (FAO).

The Food and Agriculture Organization has warned of ‘potentially serious food security crisis this year in several regional countries including Pakistan due to locust attacks’.

Community World Service Asia continues to work in close collaboration with the NDMA, PDMA[1] Sindh, local government bodies, district office and the local communities to manage these disasters, provide relief and rehabilitate affected communities with the utmost respect and dignity.