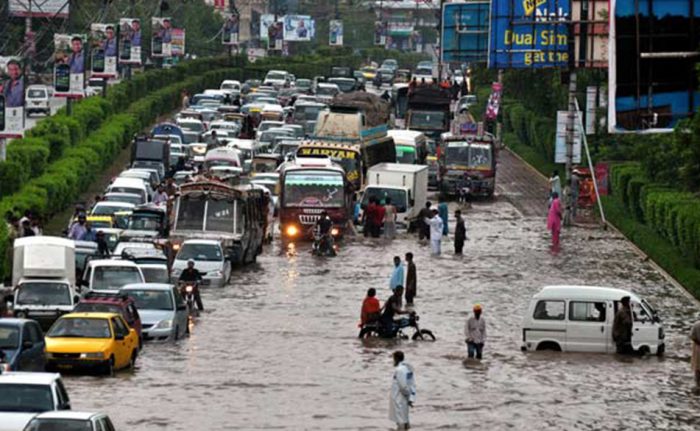 Monsoon rains continue to lash the city of Karachi and other districts in southern and central parts of the province. So far thirteen people have been reportedly dead, mostly due to electrocution. Rain water is rolling into most of the city like gushing streams. Most residential areas and houses are partly submerged in water and drainage canals and tributaries are overflowing. Side-roads on the main Karachi highway have also been washed away and are completely under-water.

Moreover, a 150-feed breach in the Thado dam, in Karachi, has resulted in thousands of cusecs of water pouring out and flooding nearby areas and towns, housing more than 6000 residents.

This rain water has inundated many urban and semi urban towns of Hyderabad, Sanghar, Tando Muhammad Khan, Badin, Thatta and other districts, in ankle-deep water.

The Deputy Director of the Pakistan Meteorological Department (PMD) released a statement indicating that there may be high chances of urban flooding in most parts of Karachi due to the city’s poor drainage system. Heavy downpour has wreaked havoc in the city, leading to most roads being submerged in water and the civic infrastructure crumpled.

The PMD has predicted more rains on Friday and Saturday, which may lead to the situation further deteriorated.