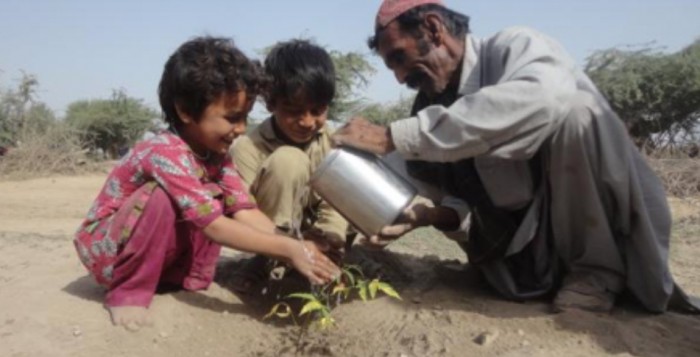 Sindh is known as the “breadbasket of Pakistan”, as the agricultural sector in the province directly supports around three quarters of the country’s population.  However, due to heavy rains, cyclones and sea intrusion, leading to rising water levels, as well as the flat topography of the land, the area is extremely vulnerable to flooding, and has suffered extensively from the effects of flooding, which causes extensive damage to the lives, health, livelihoods and homes of millions of people living around river embankments in low lying areas.

Community World Service Asia has been working to meet the urgent food needs of families displaced by flooding and residing temporarily in underdeveloped areas of Sajawal district.  The floods not only washed away their belongings, but also destroyed standing crops, leaving them food insecure and vulnerable to malnutrition and illness. To address the critical food insecurity faced by these families, Community World Service Asia provided food assistance through the distribution of wheat seeds to enable the affected farmers to sow for the coming cropping season. Each of the 1,470 farming families was provided with 100 kilograms of wheat seed, to cultivate two acres of land. The harvest from this crop would enable the families to meet their food needs until the next harvest.

Monthly food rations were also provided for a period of five months while waiting for the harvest. Rations were distributed to 2,100 families, including 70 kilograms of fortified wheat flour 70, six kilograms of pulses, five liters of oil and ten match boxes. All packages adhere to international standards to ensure that the needs of vulnerable people are respected and met.

Community World Service Asia believes in incorporating sustainability into its relief efforts, and in developing the long-term resilience of the communities with which we work.  This initiative therefore included the training of 1,470 farmers on integrated crop management, a holistic approach to sustainable agriculture based on indigenous knowledge, and the training of 419 community members on disaster risk reduction practices.

As part of the capacity building on disaster risk reduction, a tree plantation campaign, titled “One Family, One Tree”, has been initiated to protect the community from soil erosion, which exacerbates the risks of flooding.  The campaign supports the government’s efforts to minimize the threats posed by climate change and future environmental hazards, and was welcomed by the community.  With support and facilitation from the district administration and the Social Forestry Department, some 2,200 saplings for Eucalyptus, Bakine and Neem trees were provided at subsidized rates of just PKR 2 (approximately US$ 0.02) per plant.

Community World Service Asia is delighted by the enthusiasm and commitment to the campaign, and will continue to support efforts for a green future for Pakistan.