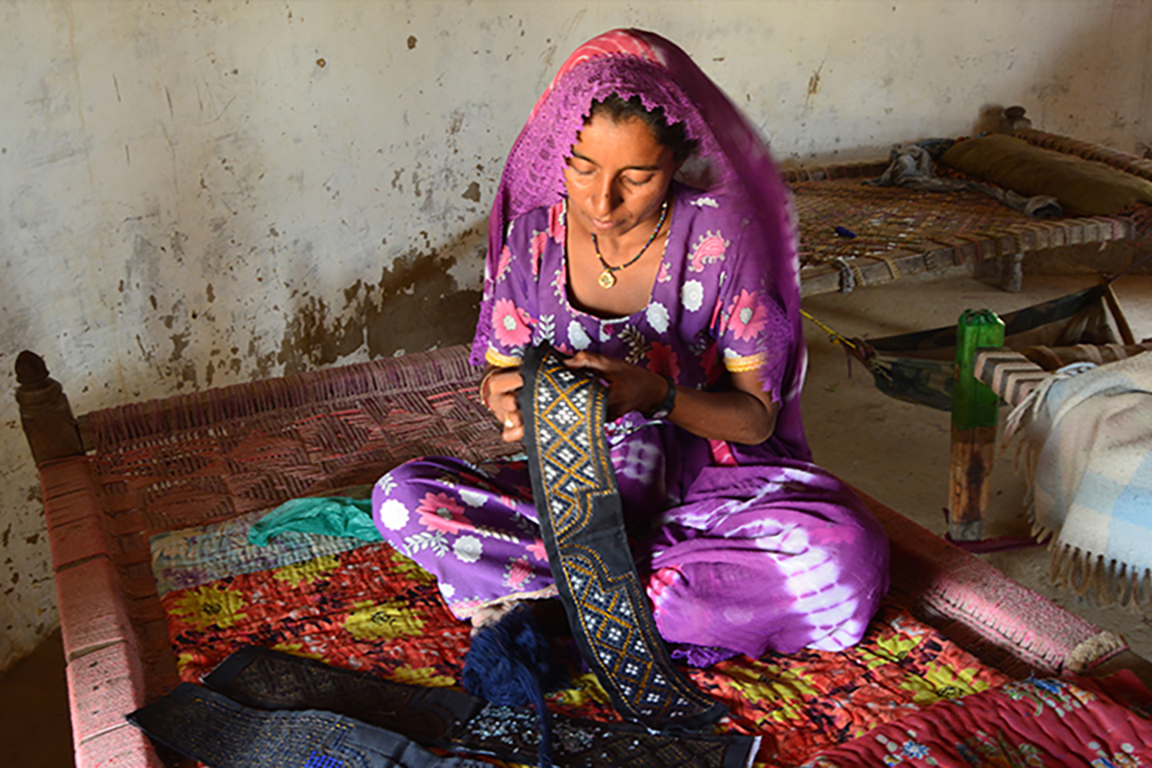 Twenty-five year-old Vadhri of Rohiraro rarely leaves home. Even though her village is just sixty kilometres southeast of Umerkot, she has not been to town for a couple of years. She may have had some liberty had her husband been alive, but since his death in 2018, she has been under the constant watch of her meddlesome, overbearing father-in-law.

Vadhri’s husband was a maker of the famous farasi (camel and goat hair carpet) of Sindh. Working ten hours a day, seven days a week, he made around PKR 4000 a month (Approx. USD 20). Though it was a pittance for the masterful work he was doing, he kept at it but remained perpetually in bondage to the middleman who provided him the required materials for the product. To this loan shark he was obligated to sell his produce at a price set by the buyer. That, it goes without saying, was considerably lower than the market price. Like hundreds of other Meghwar men engaged in this craft in Umerkot, he was too poor to procure the materials and become independent of the exploitation.

What little time he got, he laboured in the five-acre plot of land he owned in the village. Long years ago, when his father was a young man, rains were timely and plentiful and this holding provided the family with sufficient food for the year. But things had changed and now there were years when rains failed and he lost what he had invested in his land.

Meanwhile, even the priceless and exquisitely beautiful farasi was going out of fashion. Once a prized adornment in any self-respecting Sindhi home, its demand dwindled and craftsmen turned to other professions. Vadhri’s husband resolved to become a driver. From what he knew, that was a line of good and regular income. But to be a driver he did not have to go to school. All that was needed was to attach himself to a vehicle as helper to the driver.

The rules for this apprenticeship are that he was to clean the vehicle, fetch the master his cup of tea and food and be much like a slave. The master considering he was doing the apprentice a favour by teaching him a valuable skill, did not pay any salary. And so from being a slave to the farasi middleman and making a meagre living, the man became a slave to the driver without a salary.

Over time, he was permitted to do a little bit of reverse and forward practice in the village. But before he could actually master the skill, misfortune struck. On a journey perched precariously atop some baggage on a desert road, the vehicle he was riding struck an unseen speed breaker. The jolt threw the poor man onto the road where he quickly gave up his ghost because of a head injury. He was barely twenty-five years old.

Vadhri was left alone to fend for herself and her three little children. It was just as well that she was a skilled embroiderer of the prized Sindhi cap. But she too was in bondage to the buyer who supplied her the materials and purchased each complete piece for PKR 800 (Approx. USD 4). It took Vadhri a week to finish one cap, but there never was a month when she had work all four weeks. Her income therefore floated around PKR 2500 per month (Approx. USD 12).

She was fortunate to receive the monthly monetary aid under the Benazir Income Support Programme1  (renamed Ehsas) which allowed her to maintain her eldest child in the local school. Evidently a very foresighted woman, Vadhri dreams of enrolling the other two when they reach the age because, as she says, it is only be through education that they will break the shackles of poverty.

Despite the BISP support being just PKR 1000 per month (Approx. USD 8) and her own income only a little more, Vadhri, began to put away little by little. When she had saved about PKR 5000 (Approx. USD 24), she started a small general merchandise store in the village. This she gave to the charge of her father-in-law. Once again, the profit was not consumed but ploughed back into the business to constantly increase it. Meanwhile, she herself continued diligently with her cap making to feed her family.

But PKR 2500 Approx. USD 12) can scarcely keep a family of four fed for a month. Therefore, while she restricted herself to two meagre meals a day, she ensured that her children were fed as best as they could be given the tiny resource. And so, if the CWSA field staff picked a deserving candidate for food aid under the Humanitarian, Early Recovery, and Development project, it was Vadhri. This was just in time because the PKR 7000 (Approx. USD 34) accrued from selling her 2021 autumn crop of millets, guar and lentils was all but used up over the winter when children need more nourishment.

Since April 2022, her three children have food much better than they had ever had in their lives. Vadhri herself is now eating three meals a day. In mid-May, her larder still contained some of the supplies of the first handout even as she expected the second instalment the next day. She will not have to sell her goats to feed her family, she says. Why, in those difficult days of the Corona virus she had to sell two of her eight goats and had fretted that she soon might be left with no goats at all.

In May 2022, with food secured, Vadhri was yet putting away all her cap income for she had no idea how much longer the food aid would continue. There will be a time she will have to buy her own food for which she needed to save up, she said. Her next concern was that the PKR 500 (Approx. USD 2) that she spends every month on her school-going child should always be at hand. Soon the next child too will be eligible for enrolment. The food aid has made that possible.

Meanwhile, as her store continues to grow, one can only wish her well and would like to see her blossoming into an entrepreneur in a year or so.