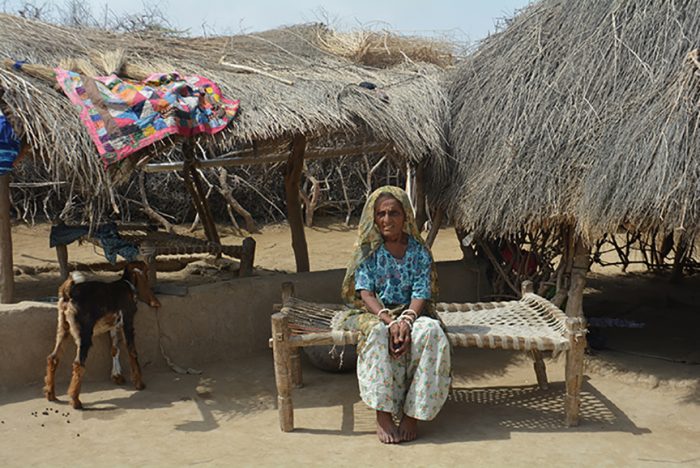 Mai Kenkoo, a 70-year-old elderly grandmother to four young children, lives in the remote, drought-struck village of Ramsar[1] with her son and his family. The family managed their expenses well with harvesting two acres of agricultural land that Mai Kenkoo owned. Her daughter-in-law worked to manage their land’s agricultural output and cattle which sufficiently fed the family and allowed them to save money to pay for the education of three of their elder children[2].

Life, however, became difficult for Mai’s family when severe drought hit the region and Ramsar village in September last year 2018. The area had been frequently affected by droughts in recent years, but the latest one had a more severe impact on the people living here. For more than a year, Mai’s family has not grown anything eatable. Mai remembered her deceased husband,

Not only were we better off when he was around but also it was less difficult to cope with the rigors of life in drought-stricken conditions.

Her husband who was a cobbler and was a support system for their family until he passed away in 2009.

The old couple only had one son and no other children to call their own. Their son was diagnosed with tuberculosis a few years ago and treated with incorrect medicines which further exacerbated his health. Mai’s son works as a cobbler for a living and mended rubber skinned water gallons commonly used for fetching water in the area. His monthly income is between PKR 800 -1000 (approx. USD 6). His wife works on handicraft production from her house and embroiders ethnic Sindhi caps for the local community on order. Through this, she earns an average monthly income of PKR 3000-4000 (approx. USD 25). Before the drought, she was also engaged in farming activities on their land.

Since mid of last year, there were no yields from our fields. My daughter-in-law worked hard but could not grow a single crop without water. Her health started deteriorating too and was unable to breast-feed my youngest grandchildren. The children’s health suffered too. There wasn’t enough food to feed them.  They felt weak and refused to walk to school. I could see the weakness on their face. None of us were able to fill our stomachs well. And there was nothing to save for future meals or to sell-off. My son’s health also worsened as good nutrition fights back his illness but there was not enough food to keep him healthy anymore. He had to stop working due to his worsening health.

The drought had affected the health of their livestock.

With no rain and the continuing dry spell for two years, we had no fodder or water to feed our cattle. They had become like skeletons and we eventually lost them to malnutrition,

narrated Mai. With the leftover farm animals (four goats and a donkey), currently, the family’s daily needs are met with the fresh produce of the cattle. Mai’s goats and donkey graze on dried sunflowers receptacles that grow wild around their land which saves their fodder expenses and gives the donkey enough energy to fetch drinking water for the family[3].

While Mai’s two elder grandsons, seven and eight years old, are off from school for summer vacation, they fetch water as they place a tire-shaped rubber water gallon on their donkey on a three-kilometer (one-way) ride.  The water they fetch is used for the family’s drinking and cooking needs of a day. When their school was on, this task was carried by either of their parents. Water for animals is sought from a nearby approachable tube-well the quality of which is bitter in taste.

Mai shared that her grandchildren’s primary education is free, but the family’s income is insufficient to meet even their household expenses. In times of illness or medical emergencies, they cannot afford the travel expenses to go to hospitals or buy medicines.

To respond to the severe drought conditions in rural Sindh, Community World Service Asia launched its emergency food assistance project, supported by Canadian Food Grains Bank (CFGB) and PWS&D, in Umerkot district of Sindh in March this year.  The project aims to assist 1600 households affected by drought through the distribution of one-month food packages between March and August 2019. Some of these households belong to Ramsar village. Mai’s family is selected as a participant of this emergency food-security project.

God has now provided us a means to food through this project. We are coming out of difficult times and not only get to eat three meals a day but are also able to save for later. In the past, we not only worry about our own meals but also for that of the cattle.  Now we only worry for their survival. Worrying about providing meals for the family lead to a lot of tension among people at our home and in the neighborhood. Tension impacts our ability to do other work also,

Water scarcity is a common problem in most villages of Umerkot. Rural women carrying matkas[4] on their heads and young boys riding donkey carts to fetch water long distances away are an everyday sight here. But with no water at all and the long droughts, it is becoming difficult for these agrarian rural communities to survive. Mai highlights other issues crippling the already resource challenged community, such as increasing unemployment and lack of nearby health facilities, especially for women. She remembers facing these problems here since she was a young girl but with time she feels the conditions have worsened.

This humanitarian drought response project not only supports provision of food inputs to communities but also ensures sustainability of livelihood beyond the project period through distribution of millet (baajra) seeds in its fourth round of distribution for the upcoming sowing season. These millet seeds will be cultivated and will provide the families a source of agricultural output in the months to follow.

My daughter-in-law will cultivate the seeds. If it rains, we will be self-reliant for our food needs. I have faith in God, he will do better for us,