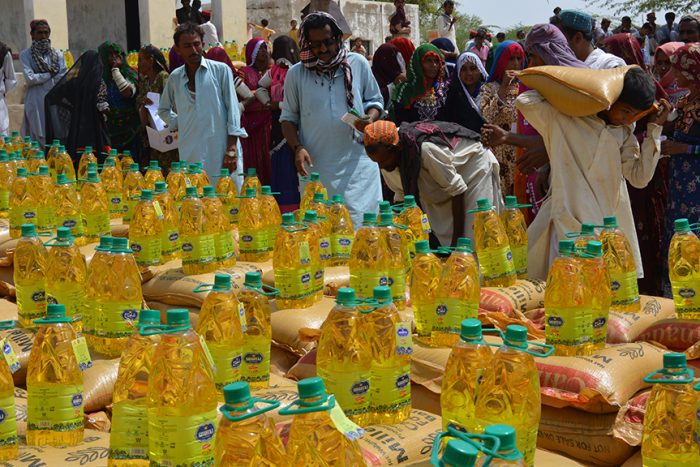 The emergency food security and nutrition project launched in March 2019, supported by the Presbyterian World Service & Development (PWS&D) and the Canadian Food Grains Bank (CFGB, is assisting 1,600 most vulnerable drought affected families in Umerkot district of Sindh province in Pakistan. Through the project, these disaster-hit families are supported with food distribution and nutritional programs that will last for six months.

The low rainfall has triggered a drought situation in the southern parts of Sindh Province. The districts have not receive any significant rainfall in the monsoon seasons resulting in a long dry spell.  The Pakistan Metrological Department released a drought alert in September declaring Umerkot and seven other districts of Sindh as severely drought affected areas. As per the assessment conducted by National Disaster Consortium (NDC), comprising of International Organization for Migration (IOM), Food and Agriculture Organization (FAO), United Nations Children’s Fund (UNICEF), ACTED and Hands, District Umerkot was identified as one of the worst drought affected districts in Sindh with 31,390 affected families in 25 Dehs (A deh is an area composed of number of small villages). The assessment results of NDC for district Umerkot revealed that as per the Food Insecurity Experience Scale (FIES), approximately 72% of the surveyed households in Umerkot are moderate to severe food insecure while 28% are severely food insecure.

In the third week of June, the third round of the project’s food distribution was successfully completed in four different locations, reaching hundreds of drought-affected families from twenty-two villages of Umerkot District. Most of the affected families, who have solely been dependent on agricultural income, were also provided with millet seeds, sufficient to cultivate two acres of land, for the next sowing season to provide a more sustainable means of economic support and to improve their food security conditions. . To ensure easy accessibility, the distribution points were selected in consultation with local communities.

Food packages distributed under this project are developed in line with the minimum standards outlined by Sphere for food security. Meeting these standards, the food packages designed and distributed ensured the provision of 2,100 kilocalories for each person daily. The package includes 60kgs of wheat flour, 15kgs of Rice, 7kgs of pulses, 4kgs of sugar, 6liters of cooking oil, 400g of tea leaves, 800g of iodized salt and a pack of 10 matchboxes.