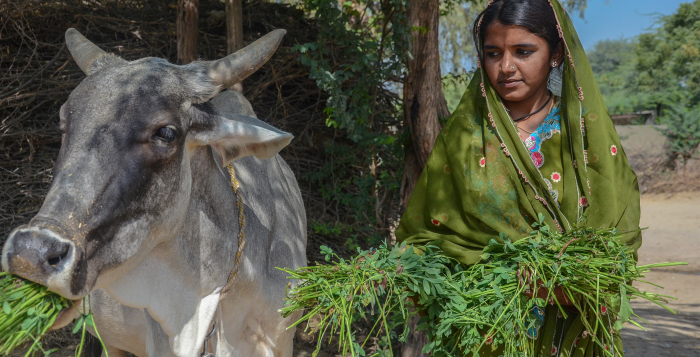 “I was engaged to marry at the age of twelve with a boy from another village. My wedding was planned as soon as I turn seventeen. To our luck, Community World Service Asia visited our village and conducted gender awareness sessions, which my family attended. After the sessions, my father realized I was too young to bear the responsibility of marriage. He wanted me to study further and take my handicraft work to the urban markets. My in-laws insisted for the wedding to be held according to agreement but my father refused. I was very happy to see my father’s stance and his strong support for me.”

Kaveeta joined the skills center established by Community World Service Asia in her home village of Mandhal Otaaq in Umerkot, and took part in the literacy and skill development trainings. Sixteen years of age, Kaveeta lives with her parents and seven siblings. Her father is a teacher in a village school and earns PKR40,000 per month. Her brother studies and teaches as well, earning PKR10,000 per month. Kaveeta herself is a student of eighth grade at the Government Girls High School in Umerkot. Prior to the skills training, she used to do embroidery and simple stitching at home as a hobby through which she would earn between PKR600 to PKR700.

“I work on the orders I get at the center. I have received five orders from Karachi including two dupattas, two shirts and one sleeves work. I earned PKR4000 from those orders. From the money I earnt, I have bought new clothes and school books for my young sisters. I also bought a cow that gave birth to two calves and is expecting a third.”

“My father has been very supportive throughout. It is important that girls have access to work and education to transform communities on basis of equality. I want to work more and become my father’s support. I am happy now as I have the freedom to work.”