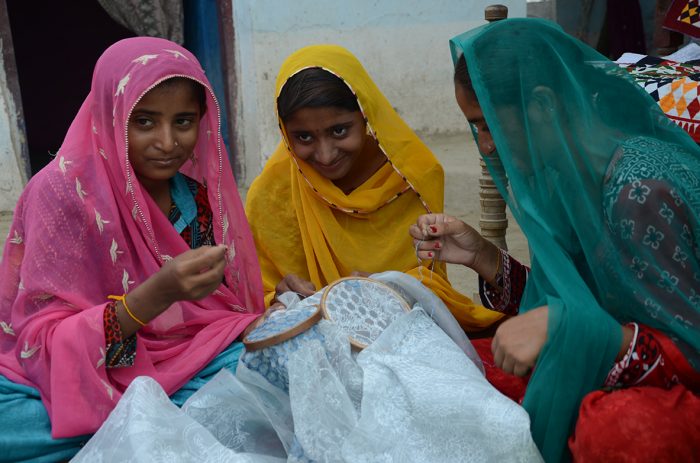 shared Yar Mohammad, a forty-one-year-old resident and General Secretary of the steering Committee in Dibh village, Umerkot. Yar Muhammad is a teacher at a local school located in his village. He has been teaching since over a decade now and firmly believes in education being an important indicator for progressive change in communities and societies.

I strongly promote education in my house. My eldest son is completing his Masters’ degree from Quaid-e-Azam University in Islamabad and my daughter, whose younger than him, is completing her Bachelor’s degree in Arts, privately,

Girls here continue their higher education but they do so privately; living in a conservative society, we do not send our daughters to far away cities alone. There are no colleges or universities anywhere near in the area that we live. However, seven of my children, including my four sons and three daughters have attended and continue to attend academic institutes, except for my youngest one, as he is very young yet.

In April of 2017, Community World Service Asia expanded their livelihoods project, supported by YCare and UKAID, to Dibh village in its third year of implementation. In a meeting with the elders of the village, the livelihoods team briefed the attendants on the project’s goals of enhancing the artisan skills of women and linking them with buyers and markets, increasing gender-based awareness and empowering women with decision-making capacities.

Being part of the initial meeting, and understanding what the project aimed to achieve, I thought of it as a very dynamic initiative for women as they rarely get opportunities of capacity building and exposure here. They naturally have a talent of stitching clothes and if this skill is further developed, they will be able to earn good money as well,

There were some men who did not agree initially as they believed it was against our cultural norms to allow women to work openly and travel to other cities for exposure. However, as an elder of the village, the people trusted my decision to invite this project in the village. Most importantly, men in the village collectively thought that this initiative will improve the standard of living of the people here.

A Steering Committee consisting of fifteen members was initially formed as the first step towards implementing this project in Dibh. The committee members included eight men and seven women Mandar, Yar Muhammad’s brother, was elected as President and Nasreen, a residual of Dibh, as vice president of the committee.

In our first joint meetings, we learnt about the basic rights of women which we were unaware of before. Inadvertently, we discriminated against women and overlooked the countless contributions they make in our households. All the members actively agreed to promote women rights and to involve them in decision-making processes of the village. These meetings are often conducted once a month but if there is an important issue to be resolved then we come together after 15 days as well.

A vocational center was successfully established in a room in one of the houses in Dibh village. This room was voluntarily contributed to be used as a vocational centre by one of Dibh’s residents.

Some men opposed the idea of skill building classes and discouraged establishing the vocational center. The steering committee held meetings to change the minds of these men and to persuade them towards supporting this development and positive change for the village people. As a result of the steering committee’s relentless efforts towards raising awareness on the rights of women and the benefits of the project, twenty-eight artisans successfully enrolled for classes at the vocational center and are enthusiastically working and learning there currently,

Moreover, we also invited other community members from neighboring villages to join the center and informed them about the skill building component in the livelihoods project. We held a meeting with the residents of Bheel, a Hindu community, to encourage them to send their women at the center for skill building as well. Today, four artisans from Bheel attend the center as well.

I am an artisan in the vocational center as well. We have been earning a good income from the orders we receive. Seeing our confidence and vocal skills in the decision-making processes, men have started to trust us more. Many of us run the budget of our households as the men give the monthly budget in our hands and trust us to manage the expenditures accordingly. The women have become so responsible and are able to save most of their earnings. They are also able to purchase gold jewelry and clothing for themselves and for their daughter’s dowry. For the healthcare of women, most of the men pay for the medical expenses. The women prefer to keep their savings for times of emergencies.

Dibh village has had the highest earning through orders in this year of the livelihoods project. They have earned approximately PKR 400,000 (Approx. 3500 U$D) since the establishment of the center which was in May 2017. The artisans in this village are very hard working and fast in their stitching skills.

The village of Dibh faced severe water scarcity and supply issues as there was no direct water to the area.

Women had to walk half a kilometer to fetch water from a well. All villagers saved money to construct a water pipeline, which enabled a direct water supply to the village. Now, the women do not have to travel long distances to fetch and carry the heavy containers back home. The members of the committee also work together in resolving other similar matters of residual families; but only when the concerned family requires the support of the steering committee,

Living in a Muslim community, it is not easy to raise voices regarding social issues, especially, concerning women as we were told by Yar Mohammad.

With the support of the elders of the village however, we were able to organize gender awareness sessions and theater performances. The performances have brought about great change in the rigid mind-sets of the villagers. Awareness was raised regarding the importance of education, especially for girls, and discouraged the tradition of early and childhood marriages. There were many families in Dibh who did not send their children to schools. As a result of the theater performances, I am happy to add that all the young girls in my village attend school regularly now.

Earlier, most young girls were married at the age of fifteen years or whenever earlier a suitable proposal came for them. Parents rarely considered the age difference or the young age of the girls.

The burden of responsibility put on the young lives weakened their health and energy level. The continuous gender sessions helped build awareness and discouraged early marriages. Many people today still live with a very rigid mind-set and do not agree for women to work side by side with men. I think women should be able to work but within certain limits. I do not agree with the empowering of women concept as it is in the west, but they should not be kept locked in houses either. They must practice their right to be educated, to grow as a person and to develop their skills and knowledge,

In Dibh, decision-making processes were run by men. Women were less vocal and were dependent on the men to make the final decision in any matter, event or conflict. Meetings with steering committee members have built the confidence of women to speak up and share their opinions with the group.

Women need a platform and a source of encouragement to come forward. Today, gladly, men and women hold joint meeting to resolve the matters of the village. Moreover, women are now more confident and motivated towards life. They take the matters of their health more seriously as compared to before. Before this initiative, the women often adopted traditional remedies to cure health issues. But this has changed. They attend the nearby health facility to avail professional advice by the lady doctor and get proper treatment,

We did not speak much before. Most of our days were spent in home errands and taking care of children. During the harvest season, women were engaged in field work for as long as eleven hours a day. It was a tough job and we hardly earnt a maximum income of PKR 200 a day (Approx. 4 U$D) and really not worth the hours spent in the harsh conditions in the fields,

Sariyat, an eighteen-year-old girl’s parents did not agree to send her to the vocational center. As an unmarried young girl, her mother thought it was better for her to be engaged in home chores,

Nazia further narrated. The women members of the committee, including Nazia, met with the family to convince her parents. The family agreed. Sariyat joined the center as a member of the Women Enterprise Group (WEG) and is now working hard on the orders she receives at the center.

We are currently saving money as a committee to purchase a water machine for our village. This will benefit the village immensely as it will provide water to the village frequently. I have great hope for the development in our village. The skill development training has given our women a platform to further continue their work and support their families in future,

The artisans from Dibh have worked on many orders they got from buyers in Umerkot city, local markets and on Nida Azwer’s, a famous urban fashion designer, order. This WEG has received really good feedback from buyers as the work pace and quality of work has been market competitive,

shared Kiran on a positive note,

I gave them an order which was a month’s work of embroidery and stitching. The artisans collectively worked so fast that they completed the order in seven days. I was surprised to see the end product as the artisans never compromised on the quality of the handicrafts. The artisans aim at completing their orders soon so that they can receive other orders. They are truly ambitious and progressive.