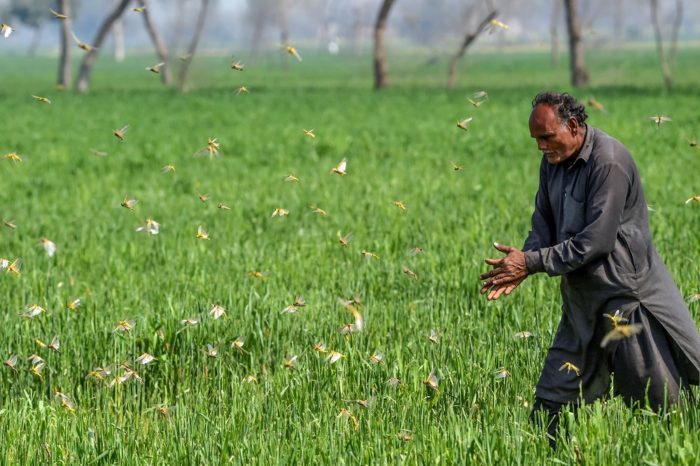 Pakistan has been hit by severe locust infestations since June 2019. The Food and Agriculture Organization has warned of ‘potentially serious food security crisis this year in several regional countries including Pakistan due to locust attack’.

Since Pakistan and Iran’s recent wet winters made a favorable breeding environment for locust swarms, the two countries have been most prone to locust attacks this year.

Agriculture accounts for twenty percent of Pakistan’s GDP and analysts fear that the pest damage by locusts could cut Pakistan’s economic growth to less than 2% by the end of the fiscal year in June 2020. Pakistan’s agricultural sector has already struggled for years in the face of drought and dwindling water supplies and this will add further damage to this sector that provides food and livelihoods to thousands of agrarian rural communities.

Pakistani farmers are currently struggling to combat the worst locust plague to hit the country in nearly three decades; insect swarms have decimated entire harvests in the country’s agricultural heartlands and have sent food prices soaring. On February 1st 2020, tackling the insects was declared as a national emergency as a large scale of cropland was destroyed in the country’s most fertile Punjab province.

According to the United Nations, heavy rains and cyclones sparked “unprecedented” breeding and the explosive growth of locust populations on the Arabian Peninsula early last year. The same locust swarms made their way to Pakistan after wreaking havoc on agriculture lands in other neighbouring countries, such as Iran. Locust swarms from southern Iran have started migrating to Pakistan from the areas of Iran-Baluchistan border and have started devastating standing crops in different part of the country. These locust swarms have laid hundreds of thousands of pods which will hatch as soon as they get a favorable environment and are feared to devour the new batch of kharif seasonal crops.

Thirty-eight percent of Pakistan’s land (60% in Baluchistan, 25% in Sindh and 15% in Punjab) has become a breeding ground for the desert locust. If the breeding regions do not contain the hazardous pests, the entire country could well be threatened by a locust invasion (FAO).

It has been estimated that the losses to agriculture in case of a locust invasion can reach to about Rs205 billion, considering a 15% damage level for the production of wheat, gram and potato.

At 25% damage level, the total potential losses are estimated to be about Rs353bn for Rabi (winter) crops and about Rs464bn for Kharif (Summer) crops.

With the Covid-19 looming high and threatening lives and livelihoods of the people of Pakistan, it is imperative to effectively and quickly contain and control the desert locust infestation to save the country’s prime production sector and livelihood and food security source.

In response to the locust swarm attack in Sindh, Community World Service Asia (CWSA) is supporting 1,600 farming families with conditional cash grants for tilling/ploughing their lands to eradicate the locust eggs before hatching. With this support, around 1,600 hectares of land will be rid of locust eggs and will be prepared for the next cultivation. Under this project, CWSA is also supporting the National Disaster Management Authority (NDMA) with provision of pesticides and is providing training to approx. 2,000 farmers on Integrated Crop Management and Integrated Pest Management approaches as preparedness measures. This will enable communities to efficiently manage pest attacks in the future.