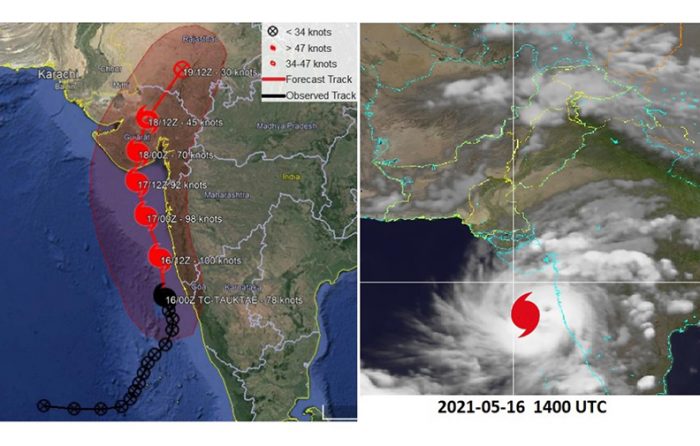 A depression formed due to strong convective clouds over the south east of the Arabian Sea intensified into a severe cyclone storm named Cyclone TAUKTAE on May 15th. Centered at a distance of approximately 1640 km south-southeast of Karachi, the cyclone posed a potential catastrophic threat to parts of India and Pakistan. On May 16th however, the Pakistan Meteorological Department reported that the cyclone will not make a landfall along Pakistan’s coastal belt and has in fact further intensified into a Very Severe Cyclone Storm (VSCS), centering at a distance of 1210 km south-southeast of Karachi. Latest reports suggest that even though the storm will not directly hit Pakistan, widespread rains, dust/thunderstorms with heavy to very heavy falls and gusty winds of 70-90Km/h are likely to occur in Thatta, Badin, Tharparkar, Mirpurkhas, Sanghar and Umerkot districts of Sindh province in Pakistan from May 17th to 20th May 2021. The same weather conditions are likely to impact Karachi, Hyderabad, Jamshoro, Shaheed Bainazirabad, Sukkur, Larkana, Shikarpur, Jacobabad and Dadu districts from May 18th till May 20th.

The Government of Sindh has declared an emergency in all districts located at the coastal belt of the province. It has ordered to remove all bill boards in the area, cleared choking points of storm water drains and restricted fishermen from going into the sea or rivers until May 20th as part of preparatory measures.

Expected heavy rains in the mentioned districts may be life threatening, causing floods, severe damage to property and infrastructure and could leave affected-communities in need of Shelter, Food, NFIs[1] and WASH support.

Community World Service Asia is closely monitoring the situation. Its emergency response team is in close coordination and contact with the Provincial Disaster Management Authority (PDMA) Sindh and other relevant district offices of the Deputy Commissioners. The teams are on standby and will start relief operations immediately if required.