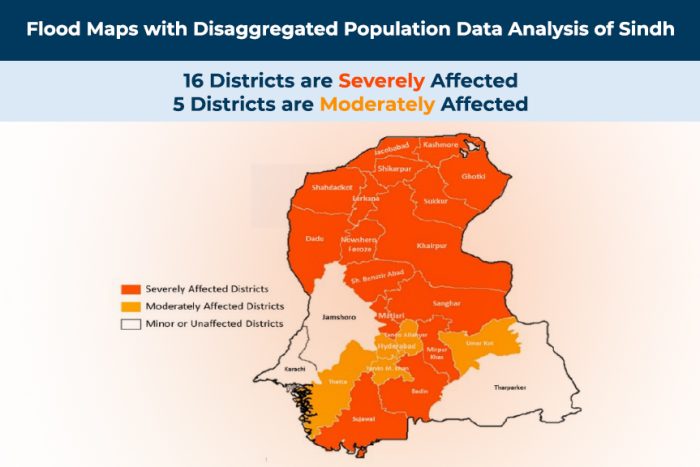 The current monsoon spell that started in the second week of July 2022 has caused widespread flooding and has led to extensive human and infrastructure damage across many parts of Pakistan. The Government of Pakistan estimates that around 33 million people across the country are affected by the rains, floods and consequent impacts such as landslides. More than 421,000 refugees living in calamity-declared districts are also affected or at risk. As of August 2022, some 6.4 million people are estimated to need of assistance.[1]

Death and injury is extensive and likely higher because of unreported number in Balochistan, Khyber Pakhtunkhwa (KP), and Sindh provinces. In the same vein, livestock and agriculture was impacted threatening food security. In addition, the floods are expected to strain existing healthcare services as gastrointestinal illnesses, malaria, skin infections, snake bites and injuries are anticipated to increase significantly.

Sindh province is affected most adversely by heavy rainfall and resultant flooding in Pakistan. Over 110 districts have declared a state of emergency in Sindh province. According to the Provincial Disaster Management Authority of Sindh, over 240,000 people remain displaced in the province as of 3 December 2022. Nearly 90% of flood-displaced people are reportedly with host communities, while the remaining are in tent cities and relief camps. While receding flood waters have allowed millions of people to go home, there are reports of significant service gaps in areas of return, in addition to extensive impacts to homes, agriculture, and livelihoods. In general, access to clean food, water, clothing, shelter and the ability to find safe areas to rest and sleep has and continues to be a challenge.

Public health concerns are high due to damaged infrastructure, stagnating water and inadequate sanitation facilities. In Sindh, between July and early October, nearly 350,000 people were suspected of having malaria, more than 700,000 had some form of diarrhea, and over 770,000 people reported skin-related diseases. The practice of open defecation has increased from one-fifth before the floods to over one-third of the affected population, with 6 million no longer having home sanitation facilities.[2]

Women and girls are vulnerable to sexual exploitation and abuse because safeguarding measures are not designed into the programmes by the organisations. Protective mechanisms such as safe spaces and support services have either been destroyed or no longer exist. Moreover, women play a large role in the household, as such, access to clean water for cooking, cleaning and toileting no longer exist. Similarly, the services such as information provision, participation, and feedback are unavailable to them and other vulnerable groups resulting in being excluded from the participatory approach at all levels.

Overview of Damage in Sindh (according to Provincial Disaster Management Authority (PDMA) Sindh from June to Dec 2022)[3]:

Recommended programming for recovery and rehabilitation in the following areas: