Home Newsroom Stories Bringing back Joy to the people of Ranwatiyoon 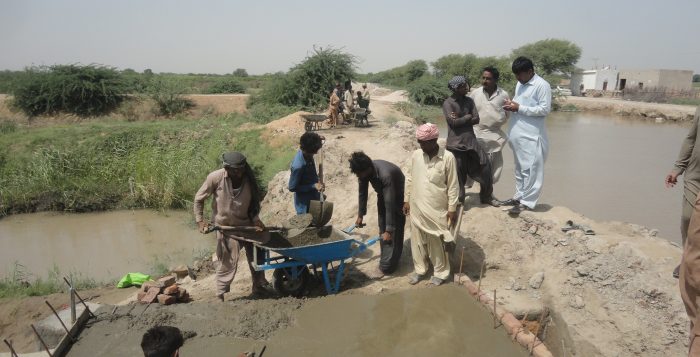 Village Ranwatiyoon is located on bank of river Indus in district Thatta. The local population here is blessed with fertile land which is the main livelihood of the area. Being located on the river bank, the local population has recurrently been hit with natural disasters like floods and cyclones since 2010. This has continuously been  affecting their livelihoods and lives.

These recurrent disasters have adversely hampered the livelihoods of the people living in the village by damaging their crops and fragile agricultural infrastructure, forcing a lot of people to settle for working for daily wages. This has lead to a  decrease in agricultural production.

This watercourse had been a source of life and livelihood for the people of Ranwatiyoon and was named “Khillan” meaning joyful when it was flowing in full volume. Local farmers were very content and at peace as the Khillan was source of supporting to their livelihood. However, a lack of financial resources of small farmers made them vulnerable as they could not reconstruct the irrigation channel on their own.

This water course runs up to four kilometers from the start up till its end, irrigating almost 355 acres of land of 155 small land holders. Farmers at the tail end of the water course could hardly irrigate their fields due to insufficient water supply and often indulged in conflicts among each other.

Observing the problems faced by these small land holders in irrigating their lands, Community World Service Asia with the support of Dan Church Aid and DANIDA, designed a project which included Cash for Work activities. Under this initiative, twelve water channels are rehabilitated to ensure a sufficient  flow and access of water to a maximum number community members.  The same scheme has also been selected for rehabilitation of uprooted farmers under the project.

Upon community identification, physical work on reconstructing the channel has been completed along with desilting of almost four kilometers of old unpaved water course. This scheme has directly benefitted twenty-six landless labors directly through cash for work. All direct participants received cash for work for almost four weeks in two cycles which enabled them to secure food for their families along with indirectly benefitting 155 small land holders. The local community is overwhelmed with the support provided to them.