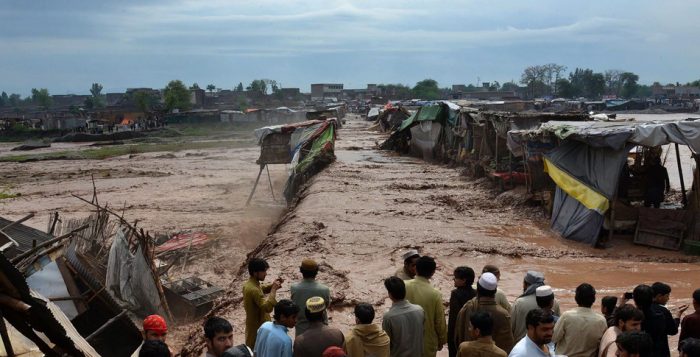 Monsoon rains continued, with intervals, in different parts of the country leaving at least ten people dead and several other injured. Eight people are reported dead in Karachi, while two in Multan and Rawalpindi.

The rains combined with the strong winds have led to collapsing roofs, land sliding and flooding in low lying areas of the country. Most of the casualties are electrocutions and collapsing roofs in Punjab and Sindh provinces.

According to the Pakistan Metrological department, the highest volume of rain recorded in Sindh is 25mm in Tharparkar’s Chachro district.

In Azad Jammu & Kashmir(AJK), heavy rains has created mayhem as people have been stuck on roads due to landslides that have blocked the Azad Kashmir to Rawalpindi travel route.

A westerly wave also persists over the northern areas of the country. Under the influence of these meteorological conditions, rain showers and thunderstorms are expected at various localities in Punjab, Islamabad, KPK, Sindh and Kashmir, while in scattered places in FATA, Gilgit-Baltistan and Baluchistan in the next 48 hours. Heavy downpour may trigger flash floods and landslides in susceptible areas of Punjab, Baluchistan, KPK, Gilgit-Baltistan and AJK.

Community World Service Asia is collecting information from different sources regarding the damages being caused by the rains and floods. Its emergency response teams are ready and will frame a response strategy, should there be any need of an emergency response.