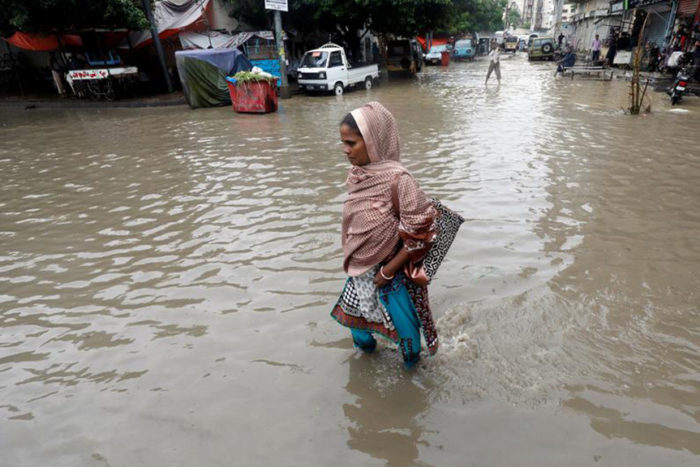 This year’s fourth spell of monsoon rains, with three days of continuous downpour, has claimed at least sixty-eight lives, left many injured and caused large-scale infrastructural damage across Pakistan. The monsoon rains led flash floods have resulted in road blockages, breaches in canals and destruction of property.

An NDMA report confirmed the death of nineteen people in rain-related incidents in northwestern Khyber Pakhtunkhwa province, thirty in southern Sindh and Karachi city, eight in Punjab province and ten in the country’s scenic northern Gilgit-Baltistan region in the past three days.

In Balochistan, at least eight people have been killed, seventeen injured and 142 houses have been completely damaged after the monsoon rains hit land and resulted in heavy flooding in Khuzdar, Jhal Magsi, Lasbela, Gwadar, Pasni, Kachi, Dera Bugti districts and surrounding areas in Balochistan province. According to Pakistan’s National Disaster Management Authority(NDMA) reports, Sambli dam in Karkh of khuzdar district has been damaged, while nearly thirty villages and link roads in Jhal Magsi district have severely been affected by flood waters. “More than a dozen people are still missing in Balochistan,” a spokesperson for the provincial disaster management authority, said.

A bridge at Pasni in District Gwadar along the Makran Coastal Highway and another bridge at Bibi Nani in Bolan district have been damaged resulting in a massive traffic suspension on both ends. Similarly, more roads in the surrounding districts have been blocked due to rain induced land sliding and flooding.  Gas pipe lines in Bolan have also been reportedly damaged by flood water.

In Khyber Pakhtunkhwa, 100 houses have been partially damaged and two have been made completely unlivable. There has been severe damage to standing crops, trees and civil irrigation channels in the province.

Different parts of Sindh including large urban hubs such as Karachi, Hyderabad and other districts namely Shaheed Benazirabad, Sakrand, Tando Jam and Thatta have been severely impacted by the heavy rainfall. Property damages have been reported in the affected areas. Majority of the deaths in Sindh have been reported in Karachi alone, with rain led electrocution being the main cause. Standing water, disrupting communication and transport, is also reported in many areas. Moreover, 28 ft. of water from hill torrents of Balochistan entered Nai Gaj, Tehsil Johi, District Dadu of Sindh. Over-flowing water from Nai Gaj has affected fifty villages in the province’s Kachho area.

CWSA’s Emergency response team is currently engaged in relief operations responding to the needs of COVID-19 affected communities in district Umerkot and Karachi city of Sindh. The team is regularly monitoring the rain and floods situation and will plan a humanitarian response to provide support to flood-affected communities when required.