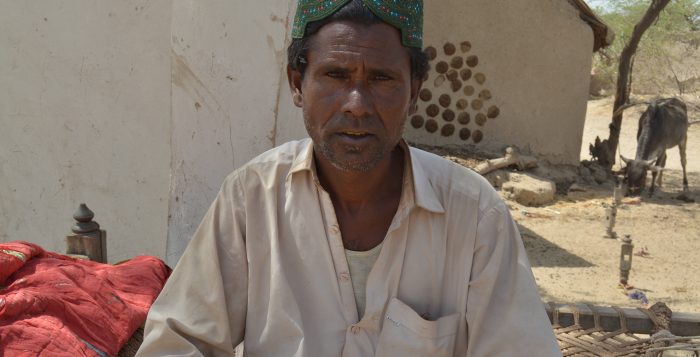 Mohan, father to five sons and two daughter, was a hopeless alcoholic, living with his family in the small but close-knit village of Haji Chanesar Mari in Umerkot. He was a selfish man who only thought of himself and never considered the impacts of his drunkenness on his wife and children. Many evenings, Mohan’s children witnessed their mother, Devi, being beaten by their drunk father. Some evenings, one of the children would become victims of his physical and verbal abuse as well.

As a small, independent farmer, Mohan earned well. Despite his sufficient earnings, Devi, was unable to save any money for the dowry of their daughters or for the purchase of cattle for the family’s nutritional support. All of Mohan’s extra earnings were consumed on alcohol. “He was consuming alcohol of at least PKR 200 regularly,” shared Devi. “At times, when he would be out of money, he would lend money from others to fulfill his alcohol craving.”

“Despite having such a beautiful family, I have mostly thought of myself only throughout my adult life,” shared Mohan himself one day. “I never dream about a better life, education, health or of other facilities for my children.”

Sajan, a gender activist in their village, took a lead to work with families affected by severe alcoholism. He had selected at least five households with whom to start work with. People advised him to consider working on other social issues, realizing the challenges he may face working with alcohol addicts. However, Sajan remained firm in his disposition as he considered alcoholism as one of the root causes of many gender based discriminatory practices and mind sets in their community. “Local alcohol is produced and is easily available from nearby villages,” Sajan pointed the severity of this issue.

Sajan and his colleague decided to train local children to play the role of drug addicts and their family members and demonstrate how one alcoholic would easily ruin a whole family. This drama was performed in Mohan’s house in his very presence. Mohan’s own son performed the role of an alcoholic who drank daily and beat his wife. At the end of the interactive play, a communal issue (alcoholism) was laid in front of the acting village leader in the play to find a resolution, seeking support from other men of the community as well. The alcoholic, played by Mohan’s son, was not even considered in the village decision making as the community saw him as a senseless man who was incapable of supporting himself or his family. “It was a very shameful moment for me that the character played by my son was hated by everyone and was failing everywhere in the community,” Mohan said disappointedly, “I realized that that could become the future of my children if I continue to drink this way.”

The story and performances touched Mohan’s slumbering soul and made him realize the impact of his disgraceful attitude on his family. He promised to quit drinking alcohol. Mohan kept his promise and quit soon after he saw the theater performance. Relinquishing a severe addiction as such as suddenly left Mohan unwell and ill. At this time, Sajan supported Mohan in acquiring medical support in Umerkot city where the doctor strictly advised him not to consume alcohol at all during this time. If he followed his advice, Mohan’s health would be better soon.

It has been month and half since Mohan has consumed a single drop of alcohol. Mohan and his family are very grateful to Sajan for not only helping Mohan leave his addiction but also in re-strengthening the family’s long lost bond. “I have stopped hanging out with friends who drank with me. I wish to become a proud father for my children and a responsible husband to my wife.”

Small efforts can sometimes bring a big change. We should never gauge or underestimate any effort that is made with complete sincerity and dedication; the results may not be seen at once but gradually it may change lives positively.