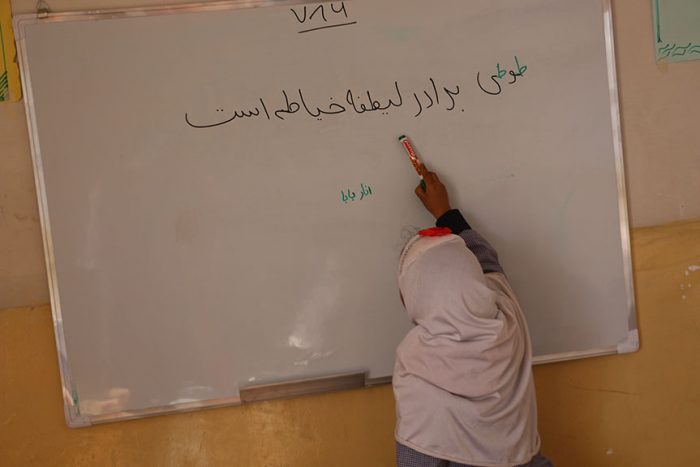 “I am a student of Grade 1 at a Community-Based School (CBS) in Laghman province. My home is near the school and it only takes five minutes for me to walk there. When I was younger, I was not allowed to attend school as most of the schools were located far from home and it was not safe and affordable to travel back and forth every day. I always dreamt of going to school but I was unable to until now,” shared Fatima.

Fatima is 10 years old now and is finally going to school as she wished for many years. When she was younger, she tried very hard to convince her parents to allow her to study at a formal education institution, but since there were no schools nearby, her father enrolled her at a Madrassaⁱ instead. Fatima shared that the teachers at the Madrassa were very strict and often harshly punished students for mistakes or small lapses.

When Fatima came to know about the Community-Based School set up near their village, she persuaded her father to enroll her in the school. Though the age limit for this school is from 7-9 years, Fatima requested Community World Service Asia’s Education team for a special permission allowing her to enroll in this school.

“I was able to convince the team by telling them that learning is possible at any age and should not be restricted by age limits. One only has to be enthusiastic about learning. After completing my studies, no matter what age, I will become a teacher and become a role model for other girls and women in our village. I will make education popular, especially among young girls residing in remote places,” shared Fatima excitedly.

“Fatima is a very intelligent student and she helps her teachers with other students who lag behind in their studies. This Community-based School has provided my daughter to avail education. If it was not for this school, my daughter would have never gotten the chance to attend a school and experience learning,” said Fatima’s father.

ⁱ A madrasa is an educational institution offering instruction in Islamic subjects including, but not limited to, the Quran, the sayings (hadith) of the Prophet Muhammad, jurisprudence (fiqh), and law.