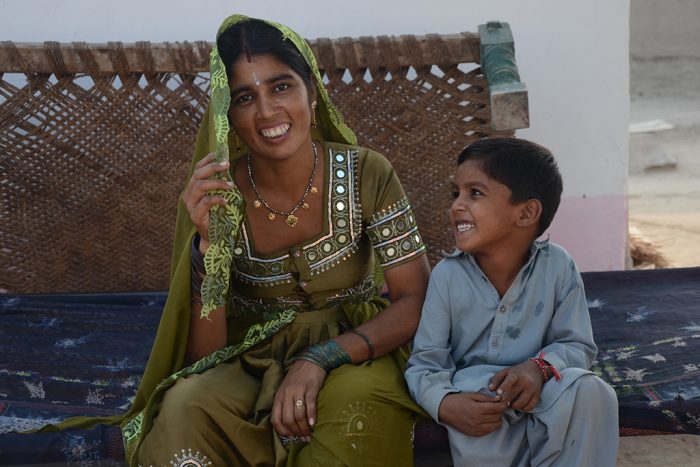 Women in the rural village of Kando in Umerkot, Sindh were a living example of what rural women in patriarchal societies are often stereotyped as: subservient, financially dependent, and restricted to their homes. Remarkably, much of this changed for the women of Kando village after a vocational training centre teaching sewing and embroidery skills, basic literacy and gender awareness sessions, was set up.

Chandri Ladho, a thirty-two year old mother and a resident of Kando, heard about the vocational center from the president of the village’s Steering Committee. She was compelled to find out more about it. After acing her assessment test for the admission to the vocational center, Chandri started learning at the centre and subsequently worked as the Quality Assurance Supervisor (QAS) at the centre. As a QAS, Chandri ensures that artisans reproduce a product if fails to deliver the set standards of quality.

As a trained artisan herself at the centre, Chandri has received many orders since she joined the vocational training center. Enhancing her sewing skills has allowed Chandri to generate a higher income for her family. She receives a monthly stipend of PKR 1600 and is currently working on a piece that will sell at PKR 10,000. Chandri attested,

The six month training was mind opening. I did not know there were so many stitches through which various designs could be developed. It was at the center that I learned six different stitches and various color combinations that improved the products I made and its value.

Chandri, along with all the other women registered at the center received literacy sessions. These sessions enabled them to read and write, and to communicate in Urdu. Before, they could only communicate in their native language which is Sindhi.

Although Chandri is now a skillful artisan and a confident entrepreneur, she was not always this way. She has been through a rich learning journey. Chandri lived  mundane life, in which she would send her child to school everyday, then help with his homework. She would go to collect water, clean her house, cooking all three meals, and wash clothes. This was her regular routine, and sometimes when time would allow, Chandri would do basic sewing for fellow villagers and would roughly earn about PKR 1,200 a month depending on the number of orders she received.

Chandri’s husband, Ladho, works in a garment factory in Karachi and earns a monthly income of PKR 10,000. He keeps half of his salary to cover his living expenses in Karachi and sends the rest to his family back home. To avoid the hefty travel expenses, Ladho visits his family once every four months. For the family to survive and meet all expenses within PKR 5000 was close to impossible but they struggled and somehow managed to make ends meet. It was very difficult to pay for their six-year-old son’s nursery school and tuition fees and affording health care was out of the question. But they prioritized their son’s education and squeezed all other expenses in what was left.

In addition to the family’s regular expenses, they were also burdened with meeting the financial strain of Chandri’s maternal issues. In order to experience a safe pregnancy, Chandri has to receive monthly medical treatment, costing PKR 3,000. Because she could not afford to receive consistent treatment, she aborted three of her babies within their first three months. It has been five years since she had a baby.

Since Chandri joined the centre and started earning, she was able to save some money and afford her regular medical treatment.  Now, Chandri is five months pregnant and is excited to be able to healthily conceive and deliver a baby after all these years.

Ladho and his mother supported Chandri’s participation in the training center since they knew it would be favorable to the family’s economic conditions. And right they were, not only has it benefited the family, but it has also positively impacted Kando village.

Before the villagers attended awareness sessions on gender issues and rights, the women were not allowed to meet anyone from outside their villages, not even other women and not even very nearby villages. Women were only allowed to visit the local hospital with their husbands. Both these scenarios have changed for the better since the village residents have been sensitized on gender issues.

Women from neighboring villages now meet regularly with the women of Kando village and they chat, discuss new ideas and work on handicraft projects together. Chandri further shared,

Many of us engaged in basic stitching at home whenever we got the time. It was time consuming, as we individually worked on orders. Now, we work together in the center. We are able to help each other and improve as a team. Working together is definitely better than working individually. We finish our orders on time and the quality of the work has also improved, increasing our value and demand of our products.

The men of Kando village now allow the girls and women of their community to receive an education and work on such enterprises. Women no longer have to wait for men to accompany them on hospital visits. Instead, women gather in groups and visit the hospital whenever they need. This way they do not need to wait for a man to accompany them in cases of emergency.

Chandri’s participation in family discussions and household decisions was not encouraged earlier. She was silences by her husband if she tried to voice her opinions in front of others, specially other men in the family.  It was after the family took part in some of the gender sessions at the centre that Chandri became more open to expressing her opinions and started being active in family decision making. In Fact Ladho now encourages her to contribute to family discussions and even asks her about her work and how it’s going. Chandri concluded,

It is important for women to earn and support their households financially. It makes life easier. Women must be strong and independent when their husbands are away to earn money in other cities. In the time of emergencies, she must be able to emotionally and financially support her family to overcome the hurdles. My involvement in the vocational centre has made me a strong woman and I am able to support my family, which makes me a proud mother.

WEBINAR: Remote monitoring – approaches to monitoring programmes in the context of COVID-19