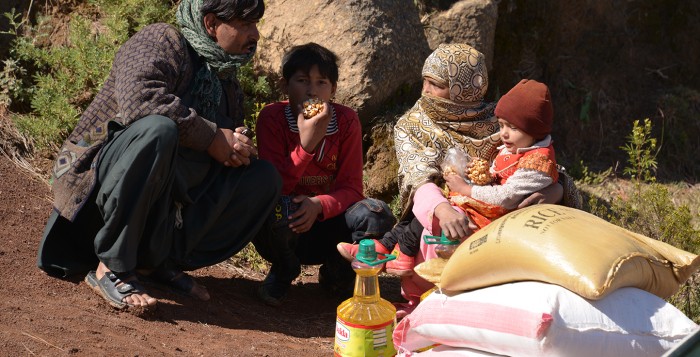 The World Food day is celebrated as the day of action against hunger and commemorates the creation of UN’s Food and Agricultural Organization (FAO) on October 16th each year. Its goal is to raise public awareness about the increasing hunger problem prevalent in the world. It aims at unifying people against hunger, malnutrition and poverty and to draw attention to achievements in food and agricultural development.  The objectives are to encourage and stimulate non-governmental efforts as a means of eradicating hunger, as well as encouraging the rural populations to take part in agricultural activities which will positively influence their living conditions. The theme for this year’s World Food Day is “Social Protection & Agriculture-Breaking the cycle of Rural Poverty”.

Community World Service Asia’s food security projects are aimed at improving the availability, access and utilization of agrarian communities. These initiatives may include emergency food distribution of agricultural inputs directly and through voucher schemes, establishment of nurseries, orchards and seed banks as well as providing poultry inputs. By improving agricultural practices, the communities are better able to utilize their resources to increase the quantity and quality of food, resulting in increased income, food security, and better nutritional status. Food security and livelihoods remain at the core of the organization’s recovery and rehabilitation activities with a particular focus on agriculture restoration. Our initiatives help disaster-affected communities meet their immediate food, non-food, shelter, health, and WASH needs while simultaneously establishing the basic foundation for resilient, longer-term recovery and development of lives and livelihoods.

When heavy monsoon rains hit different parts of Pakistan in late July this year, 10716 houses were damaged and 4111 villages were totally inundated by the resulting floods while many more villages were partially flooded affecting 1.5 million people across the country. These floods also severally damaged the infrastructure and the local livelihoods.  A total of 715 cattle perished in the floods, and more than 200,000 acres of agricultural land was damaged.

Sindh, positioned on the tail-end of Indus River, was one of the most flood-prone provinces. Need assessments were carried out by the Community World Service Asia teams to assess the urgent needs of affected communities and food Assistance was found to be the top priority for the flood affected communities.

The Sphere minimum nutrient requirements given in the table below were used to assess the suitability of general rations targeted towards the flood affected population.

Adhering to the Sphere minimum standards, food packages were designed according to the nutritional requirement for average household size of six persons in Sindh. Community World Service Asia ensured that Sphere’s standard requirement of the provision of 2,100 kcals/person/day were met for the affected communities.

To improve the nutritional quality of the ration fortification of staple commodities, inclusion of fortified blended foods, and inclusion of locally purchased commodities were ensured to provide the necessary nutrients. Aside from the ensuring the adequate calorie content in the diet, consideration of protein, fat, vitamins and minerals in food planning was of key priority.

Along with the provision of food aid, the Community World Service Asia has also been providing seeds to disaster affected communities in Pakistan and Afghanistan in order to protect their upcoming crops after disasters and to ensure the sustainability of their livelihoods and food source. Direct seeds distribution as well as distribution through voucher schemes is implemented through various Disaster Response and Livelihood projects.

Livestock restocking, provision of poultry inputs is another way of ensuring that the livelihoods of the affected communities are sustainable. In addition to the emergency food assistance provided by Community World Service Asia in times of various disasters and conflicts in the region, the organization is also involved in projects ensuring livestock productivity and decreasing livestock morbidity rate of the communities it works with. To learn more about such projects, view the latest infographic on one of the organization’s Vaccination and Deworming Campaign on our website at: http://communityworldservice.asia/enhancing-livestock-productivity-for-idps-in-kohat/.