Home Newsroom Stories After the flood: still rebuilding amid uncertainty 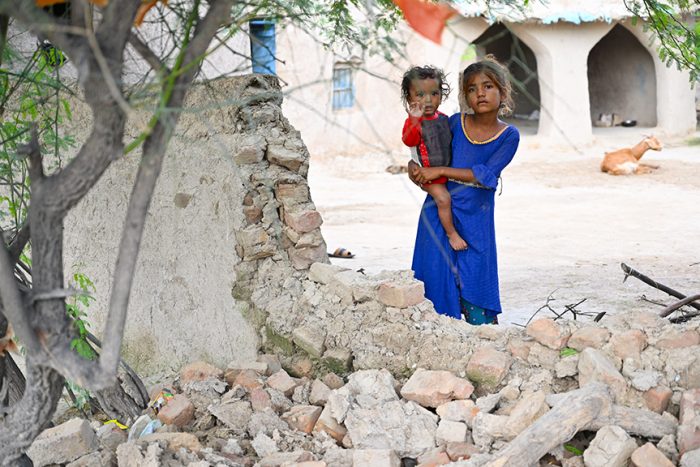 Shehdev of village Veri Sal Sarety lying 6 kilometres southwest of Umerkot, the second youngest of seven brothers is a bachelor while all the others are wedded. One of them passed away some years ago leaving behind three little children. Then the widowed mother walked out of the home leaving her children in the care of their uncle. Shehdev thus cares for four souls that includes these three children and his mother. Herself illiterate, the mother is a remarkable women for she and her husband had worked hard to educate all her seven sons. No surprise then, that Shehdev is a matriculate.

Shehdev works as a bricklayer wherever he can get work. And this is mostly in Umerkot, 6 kilometres away. With the fare being PKR 60 (Approx. USD 0.27) out and back, his daily wage varying between PKR 800 and PKR 1000 (Approx. USD 3 and 4.45), is enough to put reasonable food on the table for the five-member family. To supplement this income, Shehdev’s mother goes to the flooded cotton fields to pick the ripe crop. She knew the flood has caused venomous snakes to take refuge among the vegetation, but the work cannot be given up, especially at a time when other work is hard to find.

In July, the deluge came and construction work came to a halt. Some little savings from his work helped Shehdev and his family make it through the first couple of weeks before things began to get difficult. Had there not been some work helping local landowners drain their flooded fields and for his mother to endanger her life in the cotton fields, Shehdev would have gone under debt.

In early September 2022, food was the least of Shehdev’s worries because his mother continued her work and brought some cash. He was more concerned with the rebuilding of his collapsed home. Sahehdev, now living under a makeshift tent on higher grounds nearby to escape the flood waters, admitted the cost would be negligible because the clay for the bricks was locally available and the rafters for the collapsed roof were undamaged. Being a bricklayer himself, he was better acquainted than most with the work and as soon as he got some cash, he would begin reconstruction. If only his two yearling bulls had not died during the rains, he could have easily disposed of them for a neat PKR 70,000 (Approx. USD 312) and raised his home in quick time. But without that ready cash gone, he has to rely for cash from his mother’s farm work and himself if he is called to help drain a field. Shehdex, who is now supported through one of Community World Service Asia’s development projects, will only be able to return to work as a bricklayer when construction begins again after the last crowds have dissipated.