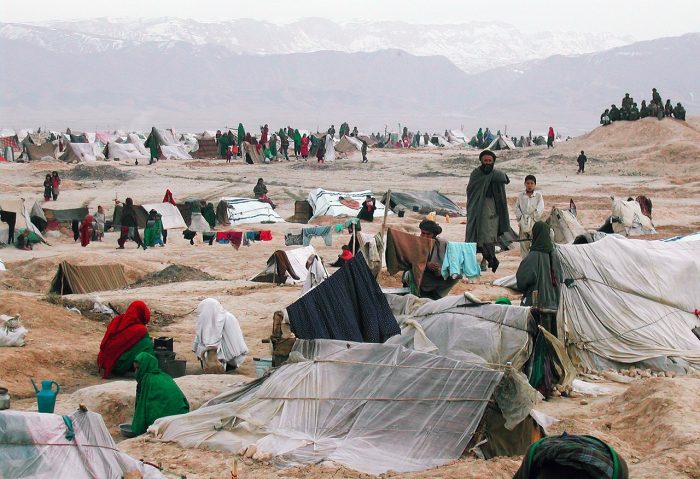 Afghanistan faces one of the world’s most acute, prolonged internal displacement crises, hosting over 4,350,900 Temporary Displaced People (TDPs) displaced by protracted conflict, ongoing insecurity and natural disaster, such as droughts, floods, and severe weather.[1] Forty-one consultations were conducted with TDP and host communities, carried out by the International Organization for Migration (IOM), the United Nations High Commissioner for Refugees (UNHCR), the Danish Refugee Council (DRC), and Community World Service Asia (CWS), on behalf of the United Nations High-Level Panel on Internal Displacement in October 2020. It aimed at capturing an overview of the eight themes put forward by the High-Level Panel; durable solution, prevention, participation and accountability, protection and social cohesion, coordination, humanitarian-development-peacebuilding nexus, specific needs and capacities and COVID-19. These consultations were carried out in urban, peri-urban and rural settlements from 13 provinces of Afghanistan.

Almost all of the TDPs interviewed, including those living in conflict-affected countries, indicated that improving the security situation in their areas of origin is a required precondition for a return. In addition, the TDP populations were directed towards strengthening socio-economic conditions in their areas of concern prior to resettlement. TDP respondents living in heavily conflict-affected provinces, such as in Badghis, Helmand, Kunar and Zabul, predominantly originating from rural, agricultural areas, noted their intention to return to their locations of origin, albeit with conditions. For TDPs living in more stable and urban environments, having often migrated farther away from their areas of origin, such as those interviewed in Herat and Kandahar, they are less willing to return and choose local inclusion as a permanent alternative. Men respondents were seen to require better access to jobs, livelihoods and professional growth programmes, while women stressed on better access to health and education. The increased presence of TDPs in existing settlements have brought differing impacts on host group – DTC ties and social cohesion. Most host communities pointed to the need to prioritize humanitarian and development initiatives on the population as a whole if displaced communities cannot return to their areas of origin.

Displaced populations indicated that without stabilization, service extension and government protection in areas of origin, they cannot return to their origin sites, and will face a repeated displacement if they do so. TDP communities claimed their optimism in the government’s long-term capacity to sustain stability is undermined by regular, repeated displacement. It was also highlighted that conflict, unemployment and poverty are key drivers to forced displacement and inhibit sustainable return. Overwhelmingly, respondents suggest that the government should step up its attempts to ensure safety and highlight the fact that violence perpetrated by all sides, keep people from returning home and leads in phases of rehabilitation.

The concerns remain largely unaddressed by the government actors, except for in Kabul and Bamyan about participation and accountability.

Regarding humanitarian and development organisations’ response to their needs, strong geographical variations emerged. Response efforts in the western region (in Badghis and Jawzjan), were perceived as more effective than those implemented elsewhere, especially in comparison to provinces in the east (Nangarhar and Kunar) and south (Helmand, Kandahar and Zabul). Respondents in Kunduz noted that non-state actors are starting to respond directly to people’s needs by providing security, justice and access to services. The TDP and host populations in the east, Laghman and Nangarhar provinces, of the peri-urban and rural areas have been unaware of current frameworks for complaint processes and other accountability mechanisms developed by humanitarian organisations. On the other hand, representatives in Herat and Zabul were observed to be reluctant of using structures such as transparency for fear of reprisals.

Most communities mentioned being able to move explicitly. However, the freedom of mobility is limited for populations residing in conflict provinces of Helmand and Zabul and also for women DTPs living in peri-urban regions of Herat and rural areas in Balkh. Host communities in conflict-affected provinces, including Badghis, Helmand, Kunar and Kunduz, indicated negative relatons with their surrounding displaced communities. The TDP population is affected by competition for available resources, such as water, employment, residential areas and grazing land. This struggle for resources typically results in less rights and less access to land for respondents in rural displaced populations than representatives of host communities. However, urbanised and peri-urban regions, such as Balkh, Nangarhar and Kabul, were cited to have positive relations between the host communities and TDPs. Social stability is increased when TDPs in metropolitan and urban areas settle in close proximity to host communities of one ethnic group and share common cultural traditions and social systems. The community consultations found that settlements that have strong connections between TDP and host communities often engage in shared decision-making, services resources and participate in common cultural and religious activities.

The consultation in central, western and northern provinces identified a comparatively successful coordination of response organizations. On the other hand, there is a prevalent perceiving of relief being duplicated and dispersed unequally in the south-east provinces, such as Helmand, Kandahar, Kunar, Nangarhar and Laghman, where humanitarian access is more daunting.

Communities in Badghis, Helmand, Kunar, and Kunduz voiced their full understanding of their short-term and longer-term needs. They were often able to articulate concrete interventions needed to bridge short-term with longer-term support. This indicates that it is important to include and include local people in the design and strategy of triple nexus efforts.

All respondents voiced a longing for comprehensive peace and an immediate cessation of hostilities between all parties involved in the ongoing conflict. Most respondents indicated that community elders should be involved in peacebuilding efforts and that they can best voice the opinion of the community.[2]

Most respondents with specific needs, such as women, children, or those with a physical disability, indicate they do not receive enough specialised support. Women in Laghman and Nangarhar noted that response organisations should focus on women’s capacities to earn a livelihood, stop gender-based violence, counteract early and forced marriage, and increase access to reproductive healthcare. In Kabul, disabled people reported facing frequent discrimination.

The strongest COVID-19 concern shared by communities is the shortage of medical equipment and personnel, followed by restricted mobility, rising unemployment and food prices, as well as feelings of psychological strain and depression. The economic crisis, caused by restricted movement and national lockdown leading to starvation and higher prices of commodities, have escalated people’s vulnerability to the COVID-19 situation and prompted people to abandon quarantine attempts to pursue employment and incomes.

Most communities, except in Helmand, that they had received information and guidance related to COVID-19 through various communication bodies including in-person, mobile health teams, religious leader and mass media such as television and radio messages.

The majority of respondents, except in Helmand, indicated that they had received information and guidance related to COVID-19, either in-person through mobile health teams, religious leaders in mosques, or through mass media such as television or radio. The plurality however noted that, since they continued to work to raise money to support their families, they did not comply with the guidance. Communities also quoted that since the financial resources were insufficient, they were unable to purchase gloves, sanitizers, soaps and other relevant products. Other interviewees indicated that misinformation often disregards public health guidance to reduce the transmission of COVID-19.

[1] IOM-DTM, 2019. “Baseline Mobility Assessment – Summary Results – Round 9”.
[2] Most respondents interviewed for this survey are, however, themselves community leaders.