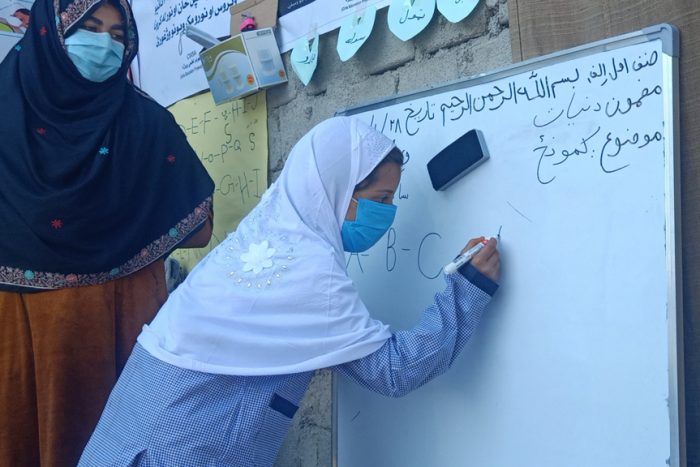 Many international stakeholders and the Afghan government have frequently lauded girls’ education projects as a success story with millions more girls being in school today1 than in the last two decades. However, the expected goal of girls’ enrollment in school is still a long way off, and in fact the proportion of girl students is declining in several regions of the country. According to the government, 3.5 million children are currently out of school in Afghanistan, and 85 percent of them are girls. Only 37 percent of adolescent girls are literate, compared to 66 percent of adolescent boys in the country.

“My father, Sayed Agha, is a Tablighi2,” Zainab, a seventh-grade student at Sultan Ghazi Baba Girls’ School in Mehtarlam, Laghman Province, shared. “He travels to different areas in the country to deliver Islamic teachings. He had always opposed higher education, particularly for girls. When I was preparing to go to school in February this year (2021), my father came into my room and informed me that I no longer needed to attend school since I was now 14 years old. My responsibility was now towards my family only and I must prepare myself for marriage. I cried for days and tried very hard to persuade my father to change his mind, but he refused. My mother also felt powerless since she could not go against my father’s decision.”

When over a week had passed and Zainab had not been seen in school, her friends Jamila and Shakira, became concerned and went to her house to see whether she was feeling well. “I explained to them why I wasn’t in school. They consoled me and offered all assistance they could. I gave them my father’s phone number and requested them to ask our principal, Basmina, to call and persuade my father. My father was outraged when she called the next day, telling her not to interfere in our private business and that he would no longer allow me to attend school. I was heartbroken and had given up hope.”

Basmina did not give up. She contacted Zarmina, a Community Mobilizer for the Girls’ Education Project3, seeking her support to convince Zainab’s father. On February 21, Zarmina and Jamaluddin, Head of Village Education Committee4, went to talk to Sayed Agha. In conversation with Zainab’s father, Jamaluddin discussed the significance of girls’ education, referencing Islamic teachings and historical precedents. He went on to talk about children’s educational rights and how education helps to groom girls and offer them with greater chances in the future. After detailed discussions and all the information shared, Sayed Agha agreed to let Zainab attend school. “When my father consented to send me back to school, I shed tears of joy. I clearly remember how happy I was the next day when I returned to school after a week of absence. I want to become a lawyer one day and wish to campaign for education rights across Afghanistan to inspire other girls to go to school and have a bright future,” beamed Zainab happily.

2 Tablighi Jamaat is a transnational Sunni Islamic missionary movement that focuses on exhorting Muslims and encouraging fellow members to return to practising their religion as per the Islamic Prophet Muhammad (PBUH), particularly in matters of ritual, dress and personal behaviour.

4 Village Education Committee is a community level committee consisting of men and women members working towards bringing positive attitudinal change in people towards education and in mobilizing the community and motivating parents/guardians to send their children to schools, especially girls.