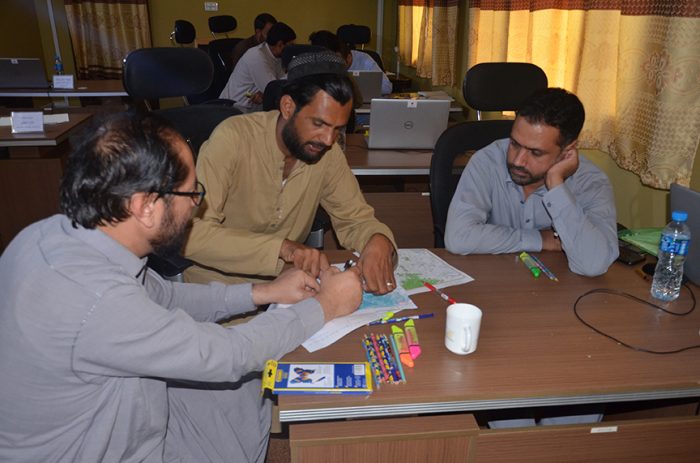 A six-day technical training on QGIS and Risk Assessment was conducted in September at a Disaster Risk Reduction(DRR) work-station established in Jalalabad, Afghanistan under a DRR project implemented and supported by Community World Service Asia and its Japanese partners. The training aimed to build local capacity and enhance knowledge on natural disaster trends, DRR Analysis, Q/GIS Software, developing Contour Maps, and interpretation of those maps into hazard maps for most risk-prone areas selected under the project. A total of eight representatives from the faculty of Nangarhar University Engineering, students from private universities, officials form the Provincial Rural Rehabilitation and Development departments, Directorate of Agriculture Irrigation and Livestock (DAIL) and disaster affected community members, participated in the training.

This Disaster Risk Reduction Project has been initiated since 2017 and is being implemented in three targeted provinces of Afghanistan; Kabul, Nangarhar, and Laghman. The project’s focus is on enhancing DRR capacity of local communities, disaster management authorities, academia and students particularly against recurring floods and landslides that affect thousands of communities every year.

Afghanistan is considered as a country prone to a number of natural disasters such as earthquakes, flooding, drought, landslides, and avalanches besides manmade disasters. Flash floods, triggered by snow melts and heavy rain, are most common in the south and southeast of the country. Disasters brought on by natural hazards affect around 250,000 people a year in Afghanistan, causing many to flee their homes, including some already displaced by conflict and violence. Since the country is located in a high seismic activity zone, and given its rugged and mountainous terrain where communities are mostly settled, there is always a high propensity for widespread death and destruction whenever an earthquake, landslide, mudslide, avalanche, or flooding occurs.

Upon completion of the training, the participants are provided with guiding documents including handouts, informational video clips, and other reference materials, which they can refer to when applying their learning and sharing among others.