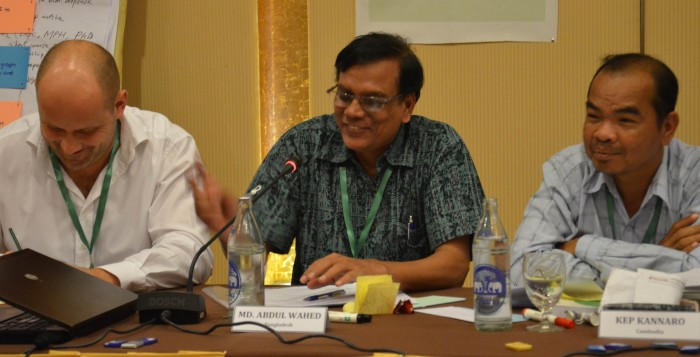 Developing a strong network, where each organization can learn and apply the Sphere standards to improve their humanitarian accountability is one of Mr. Kep Kannaro’s goals. Kannaro, the new Sphere Focal Point for Cambodia, is also the Cambodian Humanitarian Forum’s (CHF)[1] Chairperson and Executive Director of Partnership for Development in Kampuchea (PADEK).

In 2011, Kannaro participated in CWS-P/A Sphere training for the first time. Shortly afterward, Cambodia experienced massive floods. He immediately initiated an emergency response proposal, integrating the Sphere standards. “It was very difficult to put into practice,” admitted Kannaro. “We’ve been blamed for not responding as quickly as we should because of time taken by the assessments. However, the results were positive and the donors were really satisfied.”

Convinced about the potential of the Sphere standards and the importance to enhance quality and accountability of humanitarian response in Cambodia, Kannaro wanted to enhance the expertise of the Cambodian civil society organizations.

In 2012, with the support of USAID Office of Foreign Disaster Assistance (OFDA) and Asian Disaster Preparedness Center (ADPC), Kannaro created the Cambodian Humanitarian Forum, a network of national organizations dedicated to strengthening emergency response capacities of national organizations. Since its creation, CHF has organized several capacity building initiatives, including Sphere standards trainings, and established an information and resource-sharing center.

CWS-P/A approached CHF this year based on a consultative process with some Cambodian organizations about the possibility of having a Sphere Country Focal Point in Cambodia. CHF accepted this role. As Chairperson of CHF, Kannaro took it as an opportunity to learn from his peers in the region and to transfer the acquired knowledge to his Cambodian counterparts.

“Awareness has increased and standards are more integrated in their emergency response after the training given by the forum.”

Today, Kannaro is proud of the progress made by Cambodian non-profits who benefited from the trainings. “Awareness has increased and standards are more integrated into their emergency response after the training given by the forum [CHF].” He also emphasized the challenges ahead. Despite the progress, he admitted, “Not many organizations are aware about the Sphere standards, and we also need to work closely with the government to mainstream those standards into the humanitarian response.”

Kannaro is enthusiastic about how the Sphere standards positively impact humanitarian response. His goal is to advocate for a proper disaster response law that would integrate the minimum standards. “If we can integrate standards in the law, more NGOs will apply them.” With a smile and positive outlook, Kannaro concluded, “It will be difficult, but we can make it.”

Kannaro and CHF exemplify of how capacity building and an effective networking platform can strengthen the promotion and application of the Sphere standards in humanitarian programs. They also demonstrate the importance of having Sphere champions, the ones who can inspire, empower, and engage more organizations for improving humanitarian effectiveness and enhancing the quality of aid delivery to the communities.

In October 2014, Kannaro was among ten Sphere country focal points who participated in the Sphere Focal Point Forum in Bangkok, Thailand. The event encouraged candid discussion, peer learning, and joint advocacy while enabling a sense of community among Sphere practitioners across Asia. Speaking at the event about his role as the Sphere Country Focal Point, Kannaro shared, “My vision for the future is promoting awareness and the ability to apply Sphere among the network [CHF] members; secondly, to work with government line departments and ministries to integrate Sphere standards into disaster management law; and thirdly, to work together to apply and build awareness among community members so they know about the assistance they are receiving.”

[1] CHF is a network of national NGOs and civil society organizations working in Cambodia which aims to improve humanitarian actions for saving lives in communities during emergency through capacity building and training, accountability, coordination and cooperation, and quality humanitarian standard. http://www.chfcambodia.net/