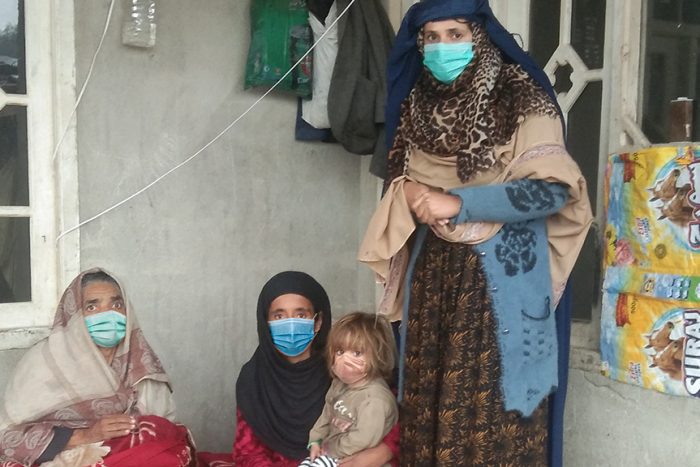 ‘No money for healthcare or protection against the winter’

“My mother was killed when I was only a year old due to a year’s long family conflict. My grandmother adopted me since then and cared for me as her own child. When I was seven, my grandmother migrated to the Unites States of America, after which I lived with my father and uncle’s family,” shared Naamah.

Naamah is a 36-year-old mother of four children, aged between four and twelve, and currently lives in Meran village of Behsud district in Nangarhar, Afghanistan. She was born in the Barriri refugee camp, located in Mansehra district of Pakistan. She lived there up until she was ten years old. In 2005, Naamah was repatriated back to Afghanistan.

Three years later, Naamah’s father was killed in the midst of a family conflict and Naamah was given in the care of her uncle, Abdullah, who was married and had five children at the time. “My uncle sold my father’s car, five acre land and some gold, all of which he inherited after taking me in. He proposed to marry me, claiming that living with him without marriage would be religiously inappropriate. As I did not have anyone else to turn to, I married my thirty-year-old uncle when I was only 13 years old.”

Naamah and her children live in a single-roomed house with Abdullah and his first wife and their six children. Together, three adults and ten children live in that one-room. Abdullah works as a cleaner and earns a daily wage of AFN 100 (Approx. USD 0.95). To make ends meet, neighbours and relatives occasionally donate money and food as charity to the family.

Naamah’s youngest child, who is only 4-years-old, is suffering from Hepatitis C, which has severely affected her liver. “She is getting weaker by the day. I do not have any access to a health facility nor can I afford to take her to the city hospital, as the treatment and travel costs are unaffordable for us. It is difficult to provide the family with sufficient food, let alone save money for healthcare. I am seriously concerned for my child’s health. I lost my parents at a very young age. I cannot bear the thought of losing my child too.”

The harsh winter in Afghanistan have exacerbated living conditions for most communities in rural Nangarhar. “We do not have any drapes to hang on the windows to keep the chilly breeze out of the house. We do not even have enough warm clothes or firewood to keep ourselves and the house warm. We have received no assistance from the government or any humanitarian organisation so far,” shared Naamah.

Naamah has been identified as a potential project participant under Community World Service Asia’s (CWSA) humanitarian response project supported by Act Church of Sweden (ACT CoS). This response is a multi-sectoral humanitarian assistance comprised of cash assistance, emergency health services, and provision of winterization kits to approximately 525 displaced families in Nangarhar province of Afghanistan over a period of three months.

Winterization kits will be delivered to affected families to help mitigate the impact of the harsh winter. A health facility supported under the project will also provide emergency healthcare services to most vulnerable, crisis and disaster affected communities across the targeted region.