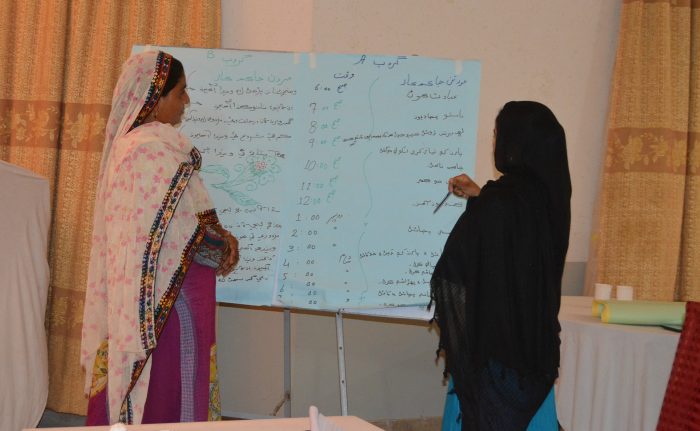 While my personal achievement is important to me, I believe that true happiness is achieved by serving others. Zareena, 17-year-old gender activist from Umerkot.

The lifestyle and traditions of the people of Ahori Farm (a rural village in Kharor Syed) in Umerkot have remained the same for years. Most of the residents here toil the land on a daily basis in an effort to survive. Through this on-going mundane lifestyle, little thought is given to educating girls or helping them develop as equal and empowered community members of Ahori farm. Many girls here do not go to school and educating girls is widely condoned in the village.

Seventeen-year-old Zareena is a rare exception in this close-knit village of Ahori Farm. She has always been different than the other girls – she spoke out against inequalities and had a fierce inclination towards education and learning new things. With her determination, she completed secondary school, unlike a majority of the girls her age in the village. However, Zareena is now being pinched by the bitter-truth of the society she has been born it – her further education has been put to a stop. Due to cultural and social reasons, her parents have refused the continuation of her further studies.

Only twenty percent of the Ahori farm girls have been allowed to complete their education fully, and sadly, Zareena was not among them. All of her friends, Monika, Roshana, Sonia, and Nadani, have also been prevented from pursuing higher education due to the same reasons. To fulfill their urge to study and as an act of goodwill, Zareena and her friends started giving home tuitions to younger boys and girls in their neighborhood.

In May 2017, a skills development center was set up in Ahori Farm. Many of the girls immediately enrolled for trainings on embroidery and other handicraft skills at the centre but Zareena had no interest in learning those kind of skills and did not join the centre.

Soon after, though, she found out about the gender equality related activities that were part of the same project (Community World Service Asia & YCare). That is what sparked her interest in the project. She was soon contacted and was selected to be trained as a community gender activist in the project. After receiving a couple of sessions of the training, Zareena realized that it was the centuries’ old norms and traditions of their village that had led to suppressing women. These customs had left the women with no determination to progress.

As women, we regularly face situations where we are treated unfairly in life, and yet are not allowed to question this tradition or reality. I had never heard about the term gender discrimination before I took the gender training. In the training, I not only discovered the concept of gender discrimination, but I also learnt how to understand gender inequalities and all its complex dynamics.

Zareena was very apprehensive about her work as a community gender activist when she started it initially at the village level. She knew that the society that she had grown up in would not accept women in such roles of change and influence. However, seventeen-year-old Zareena persevered and decided to take the risk and try changing the old norms of her community by starting from her own home. She tried to talk to her parents about the need and importance of girls’ education and how a change is vital towards the pre-conceived perception set of women in their community. At first, they ignored her, but Zareena’s mother slowly began to understand her, and eventually agreed with her. Sensing the positivity, Zareena was encouraged to further magnify this notion and cause.

With the support of her mother and elder brother, Zareena conducted interactive meetings on Girls Education and Women’s Role in Decision making with targeted households in her village. Many in her village still did not welcome a girl as young as Zareena talking about such unmentionable concerns.

More than a hundred girls still do not attend formal school in Ahori Farm even today. However, Zareena is hopeful that she can convince many parents in the village to allow their daughters to be enrolled in schools. Zareena’s elder brother has assured her that he would establish a girls’ tuition center for free.

The centre has provided me a platform through which I can serve the girls of my village in supporting them to be educated. Recently, from our village, five girls, including myself, have just enrolled into the Government High School and Government Girls Degree College in Umerkot. The parents of the other four girls trust and support my cause. They have faith in me for improving the lifestyle of our people. More than anything, I am grateful to my mother and to Mr. Ramesh Kumar, a member of our Community Gender Activists group, both of whom stood by me, helped and supported me.

According to the project team, many more parents from Zareena’s village are now allowing and encouraging their daughters to attend not only primary but high-schools as well.