Home Featured Newsroom A mother must carry on 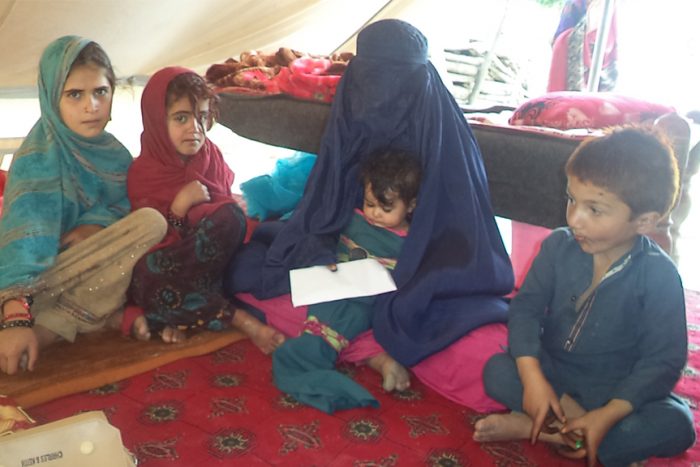 After losing her husband to the devastating June 22nd earthquake, Ayesha, belonging to Khanudin village of Paktika, now heads her family. Her four children, the eldest five years and the youngest only eight months, are all solely dependent on her for a livelihood and all care-taking. “My life was shattered in the earthquake. I lost my husband, the sole breadwinner of our family, and my seven-year-old son. We lost four more family members as well,” shared a grieving Ayesha, widowed at 30 years of age, staring at the rubble that was once her home.

Ayesha’s husband worked hard as a daily wage labourer to earn for his family of eleven members and meet their most basic household needs. His parents and his siblings also lived with them in the same house. Their house was small, and made of mud, with two small rooms and a kitchen meeting their day-to-day survival, but life went on and they were grateful for even the little that they had. “All eleven of us lived in this house. My husband’s scanty income barely filled the stomach of the whole family. My children were not able to go to school either as there was no academic facility in the vicinity and traveling long distances to far-off schools was not an option.”

“My brother-in-law would sometimes support my husband (his brother) with additional income but work opportunities for daily labour were limited here, so it was not often that he could contribute.”

In Paktika, daily wage labourers only find work in Spring and Summer season. Winters are often jobless and extremely cold. Even the daily wages paid during work season are low and only sufficient to meet daily expenses. Some days they would earn as low as AFN 50 (US $ 0.57) a day. Better days meant they earned a whooping AFN 200 a day. So, there was no fixed income for Ayesha’s husband and their family but they survived. Their family did not own any livestock either which is the prime livelihood source for most rural communities in the area.

“I am now living at my brother’s house with eight of his own family members. We (my children and his) all rely on the little income my brother earns as a labourer, as I do not have any special skill to earn money for my family. My children were barely eating two meals a day.” As a child Ayesha did not receive any formal education. There was no concept of girls going to school at the time nor did they have the financial means to afford it. Ayesha’s elder son, the one who passed away in the earthquake, was the only one among them who attended school sometimes when their financial situation was better.

During assessments for an emergency earthquake response project supported by CWS Japan, Community World Service Asia identified Ayesha as a project participant from Paktika. Under the project, Ayesha will receive USD 80 (Approx. AFN 7,067) per month for three consecutive months, starting in July. “I am happy to have received this assistance (after receiving first tranche) because I am relieved now that my children will be sleeping with a full stomach and we no longer have to rely on my brother whose own family is suffering due to the additional burden.

I have bought all the groceries including rice, beans, meat, vegetables and fruits for my children,” shared Ayesha with relief. After purchasing essential food items and some vital medicines, Ayesha has also been able to save some money for emergencies and the harsh winter ahead.

Many vulnerable families like Ayesha, who have been displaced and affected by natural hazards and conflict in Afghanistan are unprepared and without essential resources for the upcoming winter in the country. These Afghan people need all our support now more than ever. Currently, 1 in 3 people are hungry and 2 million children are malnourished[1].  With drought, poverty, economic instability and extreme climatic conditions,  the food security situation will continue to worsen; and hunger will rise.