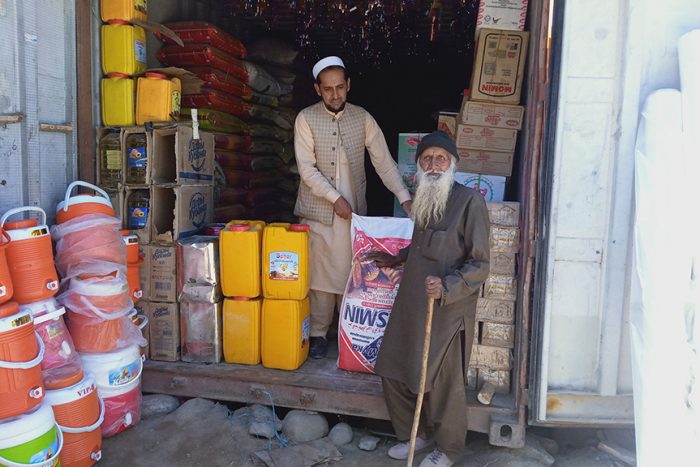 Seventy-year old Dadyar Shah was been struggling to provide food and a warm house for his family up in the mountains in Afghanistan’s freezing winter spell. A resident of the Oulook village in Dawlat Shah district, Dadyar has been suffering from a physical disability and has long been unemployed. He lost his only son and the family’s sole breadwinner in a cross-fire between armed groups two years ago. Since then Dadyar has been making ends meet to feed and shelter his wife, daughter-in-law and his four grandchildren.

“There is nothing more painful than failing to feed starving family members,” sighs an exhausted Dadyar.

Dawlat Shah district is located 74 kms from Mehterlam, the provincial centre of Laghman in Afghanistan. With its rugged topography, this mountainous district has limited agricultural activity. Irrigating the lands is not practicable on an equitable basis due to the altitude of the land. For most of its residents, forestry is a major source of revenue. Fruits are sold in nearby and local retail markets and wood is primarily sold, being used as fuel for cooking and heating the homes during winter season.

The ongoing conflict in the region and its sudden escalation in August 2021 damaged many of the forests in the Dawlat Shah district and lead to large-scale deforestation. Many of the fruit trees perished in cross-fire and bombardment. With their only source of livelihood lost, many local families were forced to migrate to the mainland in pursuit of employment opportunities and household resources.

Dadvar Shah has been unable to find a means of income to support his seven-member family. The wood that he fetched and sometimes sold is scarce now and barely enough for household consumption. People in the local community and neighbours help Dadyar’s family when they can by donating meals or other in-kind support. However, that does not guarantee a regular or sufficient meal. “Being chosen for aid through CWSA’s emergency relief effort has been a blessing. Until now, we have received no assistance because we live in a distant region. Because of its steep terrain, commuting in Dawlat Shah can be challenging so most aid could not reach us.”

To reach the most vulnerable and food-insecure households during Afghanistan’s harsh winter, the COVID-19 pandemic and on-going conflict, Community Word Service Asia, Japan Platform and CWS Japan jointly responded to the immediate humanitarian needs of 630 most vulnerable families in three districts of Laghman (Alingar, Alishing, and Dawlat Shah). The project aimed to address winterisation and food security needs.

In April 2022, Dadvar Shah received USD 90 (equivalent in AFN) for food in the first tranche of distribution under this emergency response project. An additional USD 55.5 (equivalent in AFN) was provided as one-time assistance to cover winterisation needs. Dadyar will be receiving the cash assistance for three successive months up until June. “The assistance helped me put sufficient food on the table to serve all my family members. The grocery I bought allowed my children to sleep with a full stomach. In addition, I purchased warm clothes and wood with the winterisation assistance to keep the house and children warm during the severe winters.”

Many families like Dadyar’s are struggling to survive on a daily basis and are hard hit by poverty. The country’s volatility has curtailed work possibilities, forcing people to flee and increasing food insecurity, mortality rates and other social injustices. CWSA and partners’ cash assistance and quick response is proving to be a lifeline for many families facing financial difficulties and health risks. Humanitarian cash support has also helped local communities preserve their dignity– by allowing families flexibility in how they spend the money, making their own informed decisions to meet their specific needs.